Nick Maximov vs Andre Petroski is set to go down at UFC Fight Night: Błachowicz vs. Rakić at 6:00pm EST on Saturday 14th May 2022 in a 185lbs matchup.

Nick Maximov has won both of his UFC fights, with his most recent victory coming against Punahele Soriano in February.

Andre Petroski has also won two in the UFC after a first-round submission win over Yaozong Hu at UFC 267.

Nick Maximov will be the betting favorite with opening odds of -405.

Andre Petroski is the betting underdog with opening odds of +330.

This Middleweight scrap will take place on prelims at UFC Fight Night: Błachowicz vs. Rakić.

Maximov is now 2-0 in the UFC after a dominant display against Cody Brundage at UFC 266. He earned his UFC contract after winning a Heavyweight bout on the Contender Series in November 2020.

Andre Petroski put his Ultimate Fighter Season 28 disappointment behind him with two stoppage win over 2021.

Short notice was no problem for @PetroskiAndre, who dominated and locked up the submission 🔒 #UFC267 pic.twitter.com/pNrOg9pmF4

Petroski submitted Yaozong Hu in October after a ground-and-pound victory over late-replacement Michael Gillmore on his UFC debut in August.

Both of these men stand at 6”0, although Nick Maximov will have the 3-inch reach advantage.

Andre Petroski is the older fighter at 30 years old, while Nick Maximov is just 24.

💥@PetroskiAndre lands a heavy right and takes it to the ground

The stats show how grappling-heavy both of these fighters are. Nick Maximov has landed an average of 5.67 TDs per 15 minutes to Petroski’s 4.29.

Andre Petroski has maintained a much-higher striking output with 4.22 significant strikes per 15 minutes to Maximov’s 1.78.

Both of these fighters have enjoyed promising starts to their UFC careers and can make it three wins in a row.

However, a defeat for either fighter would put them right back to square one.

The oddsmakers’ predictions have Nick Maximov as the heavy betting favorite with odds of -405.

Get your Nick Maximov vs Andre Petroski picks in.

Nick Maximov vs Andre Petroski tale of the tape 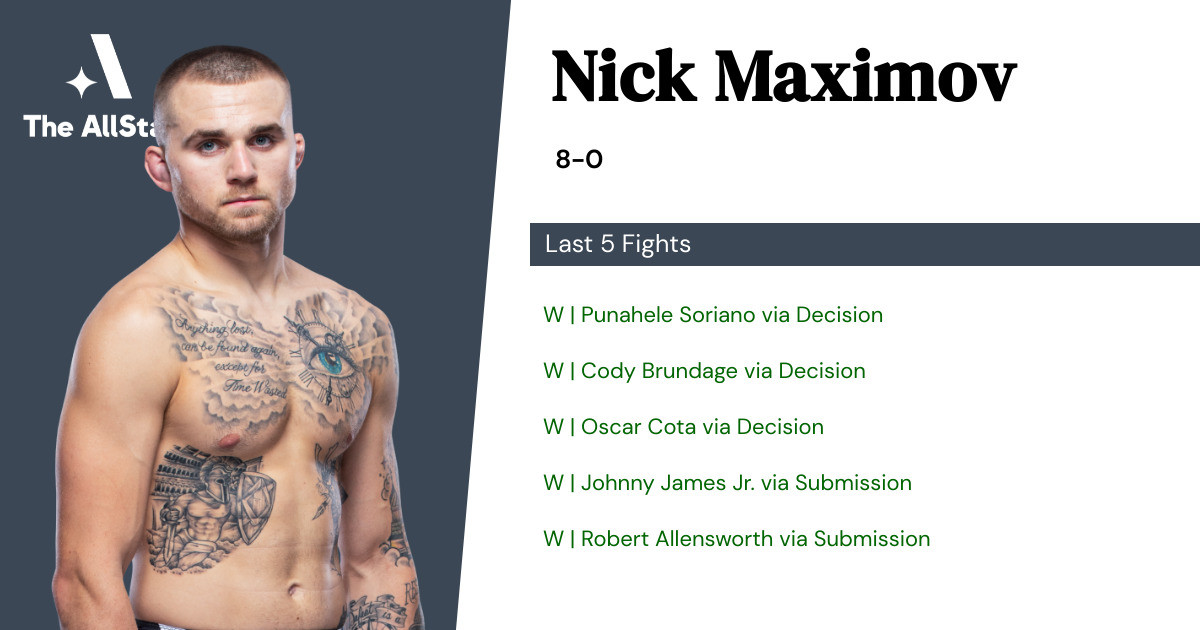 Nick Maximov has a 63% finish rate, including 2 by knockout, 3 by submission, 3 by decision. 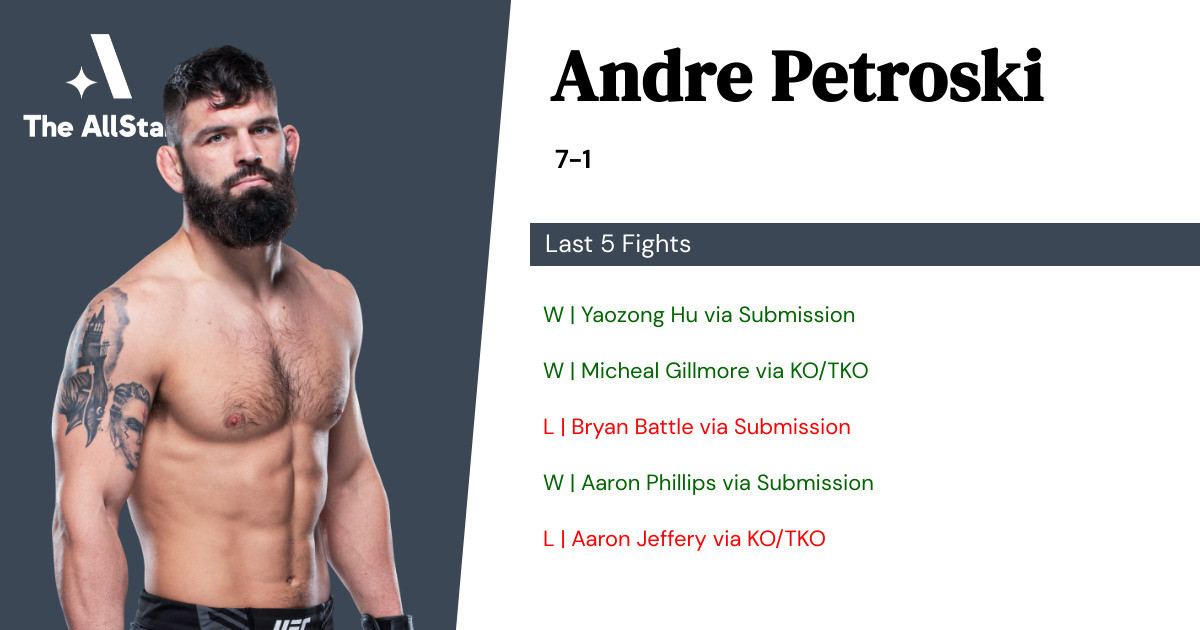 Andre Petroski has a 100% finish rate, including 4 by knockout, 4 by submission.

Nick Maximov vs Andre Petroski is set to go down at UFC Fight Night – Błachowicz vs. Rakić. The fight is expected to start at around 6:00pm EST on Saturday 14th May 2022.

ESPN+ is the best option to live stream Nick Maximov vs Andre Petroski if you live in the United States. Outside of the USA, the best option is to register for UFC Fight Pass.

Where can I get the best odds for the Nick Maximov vs Andre Petroski UFC fight?

Use the AllStar’s directory to find the best sportsbooks and recommendations on where to place UFC bets online. If you just want to play for fun, head over to to our Fantasy UFC picks app to make your fight predictions for Nick Maximov vs Andre Petroski totally FREE.