Ode Osbourne vs Zarrukh Adashev is set to go down at UFC Fight Night: Volkov vs. Rozenstruik at 9:00pm EST on Saturday 4th June 2022 in a 125lbs matchup.

Ode Osbourne returned to the win column with a unanimous decision win over promotional debutant C. J. Vergara in November.

Zarrukh Adashev picked up his first win in the UFC with a unanimous decision over Ryan Benoit.

Ode Osbourne opened as a -145 betting favorite. Placing a bet on Osbourne means you would need to bet $145 in order to win $100.

Ode Osbourne bounced back from a first-round KO defeat to Manel Kape with a convincing victory over C. J. Vergara.

The action is picking up early in the third 👀

Since earning his UFC shot with a submission win on Dana White’s Contender Series in 2019, Osbourne has gone 2-2 in the promotion.

After some vicious leg kicks from Adashev, Benoit showcases his power! #UFCVegas33 pic.twitter.com/6DBdpyNCQX

The Uzbek kickboxer entered this fight 0-2 in the UFC after defeats to Tyson Nam and Sumudaerji. After losing his professional debut in 2015, Adashev picked up three wins in Bellator before joining the UFC.

Ode Osbourne is slightly taller than his opponent at 5”6, while Adashev is 5”5. However, Osbourne will enter this matchup with a huge 7-inch reach advantage.

The stats reveal that Osbourne is able to mix in the takedowns with 1.09 TDs per 15 minutes, while kickboxer Zarrukh Adashev has never shot for a takedown in the UFC.

This is a fantastic matchup between two dangerous fighters. Zarrukh Adashev is a talented kickboxer with technical striking, while Ode Osbourne brings a more well-rounded game to the Octagon.

Both fighters earned much-needed victories in the last UFC appearances. A victory for either man would help them climb the Flyweight rankings and possibly bring a top 15 opponent next.

The oddsmakers’ predictions have Ode Osbourne as the slight betting favorite with opening odds of -145. 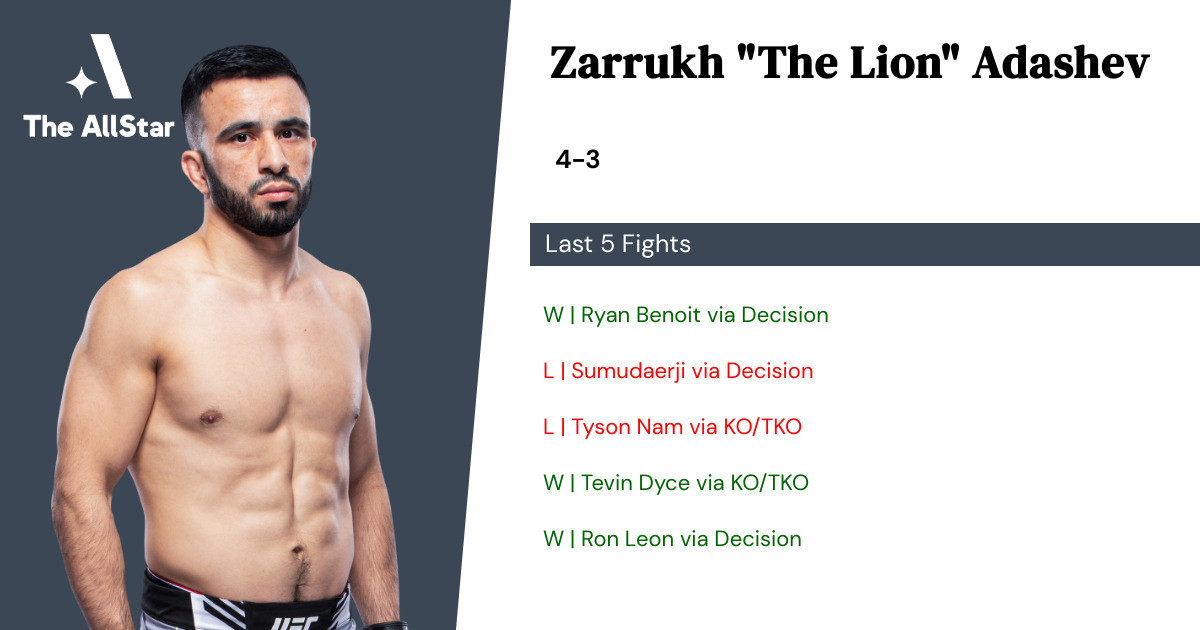 Zarrukh Adashev has a 50% finish rate, including 2 by knockout, 2 by decision.

Zarrukh Adashev is looking to put together a winning streak, having last beaten Ryan Benoit at UFC Fight Night: Hall vs. Strickland. 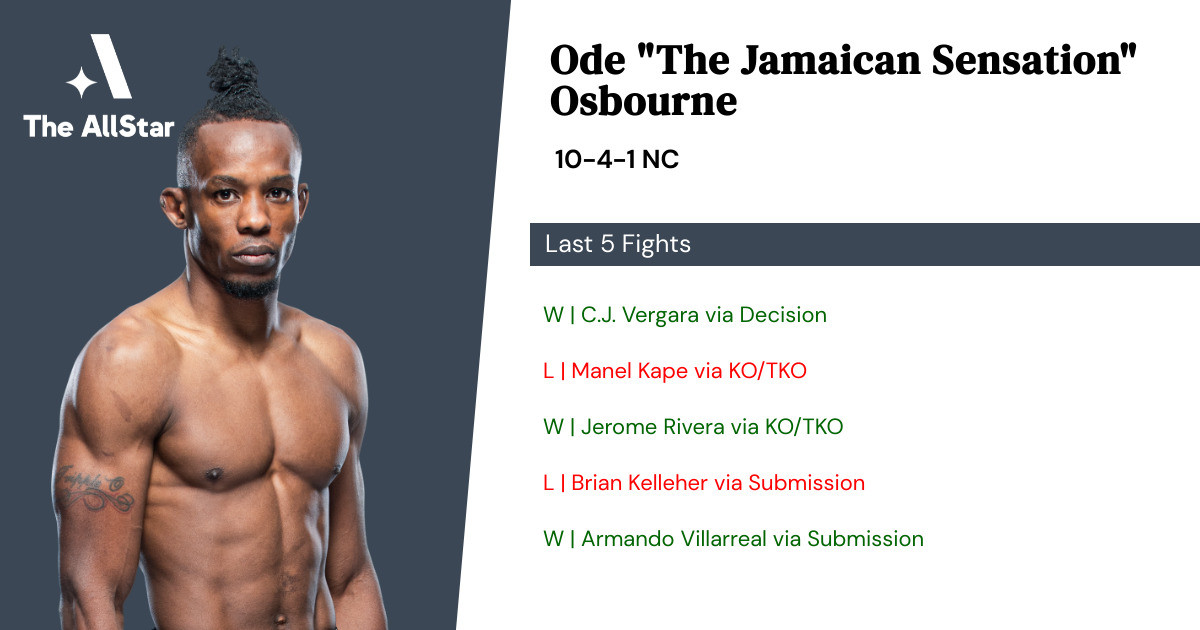 Ode Osbourne has a 80% finish rate, including 3 by knockout, 5 by submission, 2 by decision.

Ode Osbourne is looking to put together a winning streak, having last beaten C.J. Vergara at UFC 268: Usman vs. Covington 2.

Ode Osbourne vs Zarrukh Adashev is set to go down at UFC Fight Night – Volkov vs. Rozenstruik. The fight is expected to start at around 9:00pm EST on Saturday 4th June 2022.

ESPN+ is the best option to live stream Ode Osbourne vs Zarrukh Adashev if you live in the United States. Outside of the USA, the best option is to register for UFC Fight Pass.

Where can I get the best odds for the Ode Osbourne vs Zarrukh Adashev UFC fight?

Use the AllStar’s directory to find the best sportsbooks and recommendations on where to place UFC bets online. If you just want to play for fun, head over to to our Fantasy UFC picks app to make your fight predictions for Ode Osbourne vs Zarrukh Adashev totally FREE.