Ovince St. Preux is on a two-fight losing streak after consecutive knockout defeats to Jamahal Hill and Tanner Boser.

Mauricio “Shogun” Rua returns from an 18-month layoff off the back of a defeat to Paul Craig at UFC 255.

Ovince St. Preux will be the betting favorite with opening odds of -230.

Mauricio Rua opens as the betting underdog with odds of +200.

This will be a rematch between these two fighters, who first met in November 2014. St. Preux won their first encounter by knockout in just 34 seconds.

Ovince St. Preux has lost three of his last four UFC fights, with his only victory in this period coming against Alonzo Menifield in September 2020.

St. Preux has only picked up two victories since 2019, with his other win coming against Michał Oleksiejczuk via his signature Von Flue Choke.

Mauricio Rua suffered a defeat in his last UFC appearance, losing his rematch to Paul Craig by tapping to strikes in Round 2.

Shogun’s last win in the UFC came against Antonio “Big Nog” Nogueira in July 2020. Since Rua’s defeat to St. Preux in 2014, he has won five of his eight UFC fights.

Ovince St. Preux will be the taller fighter in this matchup at 6”3 compared to Shogun Rua who is 6”0. OSP will also have a big 4-inch reach advantage.

Both these men have a high finishing rate. OSP has finished 80% of his wins (11 KOs and 9 submissions) while Shogun Rua has an 82% finish rate (21 KOs and 1 submission).

This will be a fascinating rematch between two veterans at the tail end of their careers. St. Preux knocked Shogun out in just 34 seconds in their first matchup.

Both fighters have an excellent record of finishing fights. Shogun tends to knock his opponents out, while OSP has a versatile arsenal of striking and submissions, including his signature Von Flue Choke.

While neither fighter has a reasonable chance of gaining title aspirations from a win, there is still a lot at stake.

Shogun will seek revenge for his knockout loss back in 2014, while St. Preux will be eager to get one over the legend once again.

The oddsmakers’ predictions see St. Preux as the clear favorite with opening betting odds of -230.

Get your Ovince St. Preux vs Mauricio Rua picks in.

Ovince St. Preux vs Mauricio Rua tale of the tape

Both fighters have a record of 3-1 against the common opposition. 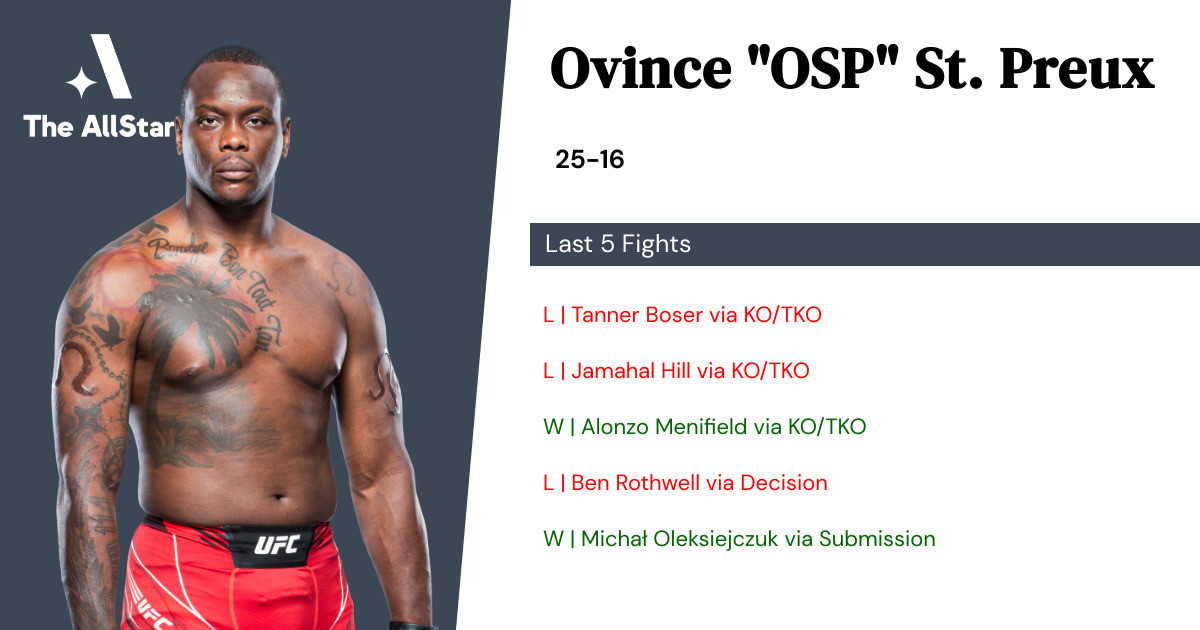 Ovince St. Preux has a 80% finish rate, including 11 by knockout, 9 by submission, 5 by decision.

Ovince St. Preux is currently on a 2 fight losing skid. 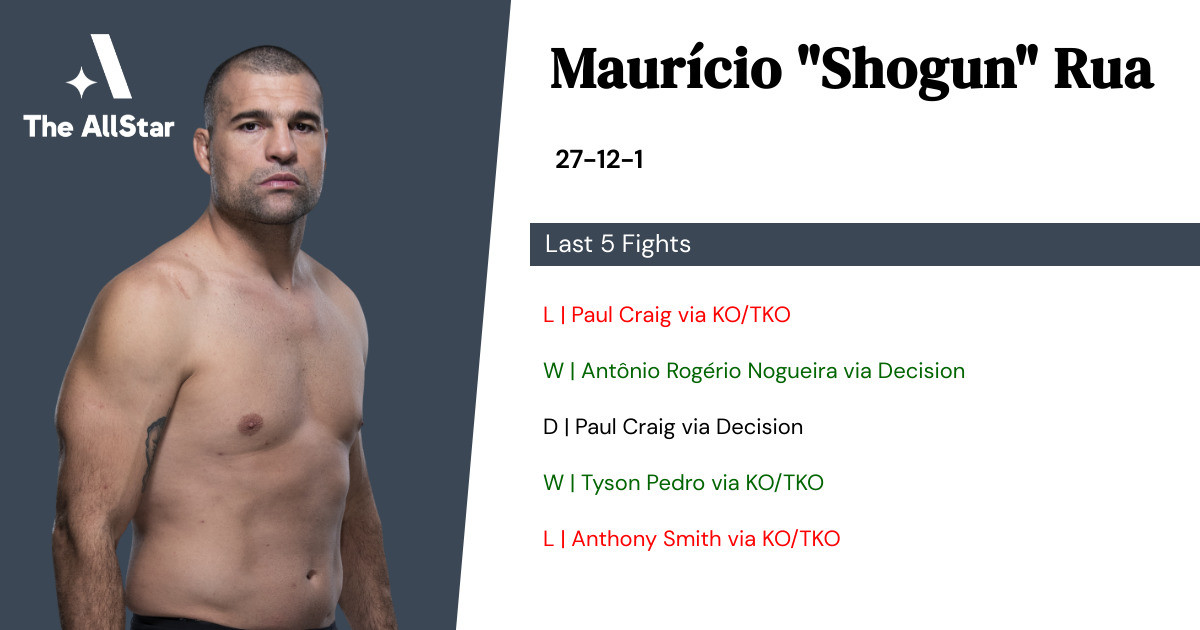 Maurício Rua has a 82% finish rate, including 21 by knockout, 1 by submission, 5 by decision.

Maurício Rua is looking to get back to winning ways after a loss at the hands of Paul Craig at UFC 255: Figueiredo vs. Perez.

How to watch the Ovince St. Preux vs Mauricio Rua fight with online UFC streaming

ESPN+ is the best option to live stream Ovince St. Preux vs Mauricio Rua if you live in the United States. Outside of the USA, the best option is to register for UFC Fight Pass.

Where can I get the best odds for the Ovince St. Preux vs Mauricio Rua UFC fight?

Use the AllStar’s directory to find the best sportsbooks and recommendations on where to place UFC bets online. If you just want to play for fun, head over to to our Fantasy UFC picks app to make your fight predictions for Ovince St. Preux vs Mauricio Rua totally FREE.