Pat Sabatini has made an exceptional start to his UFC career, winning three fights in a row over 2021. His last victory came in November with a unanimous decision win over Tucker Lutz.

T.J. Laramie steps in to take this fight off the back of a submission defeat to Darrick Minner on his UFC debut.

Pat Sabatini will be the betting favorite with opening odds of -480.

T.J. Laramie is the betting underdog with opening odds of +380.

Sabatini is one of the biggest betting favorites on the card.

M.Baghdasaryan & G.Tucker out. Pat Sabatini and TJ Laramie will now fight each other at UFC event on April 16th. #UFC #MMA #UFCESPN #UFCVegas51

Sabatini was initially booked to fight Gavin Tucker before his opponent withdrew. T.J. Laramie steps into this fight on less than four weeks’ notice.

Pat Sabatini has won all three of his UFC fights since making his debut in April 2021. He dominated Tucker Lutz in November, with one judge giving him a 30-26.

Sabatini has won two fights by unanimous decision and one by heel hook. He brings exceptional grappling skills and a dangerous submission game to the Octagon.

T.J. Laramie saw his UFC debut end in less than a minute after losing via guillotine choke to Darrick Minner.

Did @LaramieTJ do enough to earn a contract? #DWCS pic.twitter.com/K3koX5Xefx

The Canadian hasn’t fought in over a year after a couple of fights fell through over 2021. He earned his UFC contract with a stoppage victory on Dana White’s Contender Series.

Pat Sabatini will be the taller man at 5”8 compared to Laramie who is 5”6. He will also have a significant 4-inch reach advantage over this fight.

T.J. Laramie is much younger at 24 years old, while Sabatini is 31. Both of these fighters bring a similar level of professional MMA experience into the Octagon.

This is an intriguing matchup between two exciting talents in the UFC Featherweight division. Sabatini in particular is highly touted and is likely to look for the finish in this one as the heavy favorite.

Both fighters have a lot at stake in this fight. T.J. Laramie is looking to record his first win in the promotion having not fought in over 18 months since making his debut.

Sabatini is on the cusp of breaking into the Featherweight Top 15 rankings after recording three dominant wins in a row. This could be the fight where he stakes his claim for a ranked opponent next.

The bookies’ predictions heavily favor Pat Sabatini who opens as the -480 betting favorite.

Get your Pat Sabatini vs T.J. Laramie picks in.

Pat Sabatini vs T.J. Laramie tale of the tape 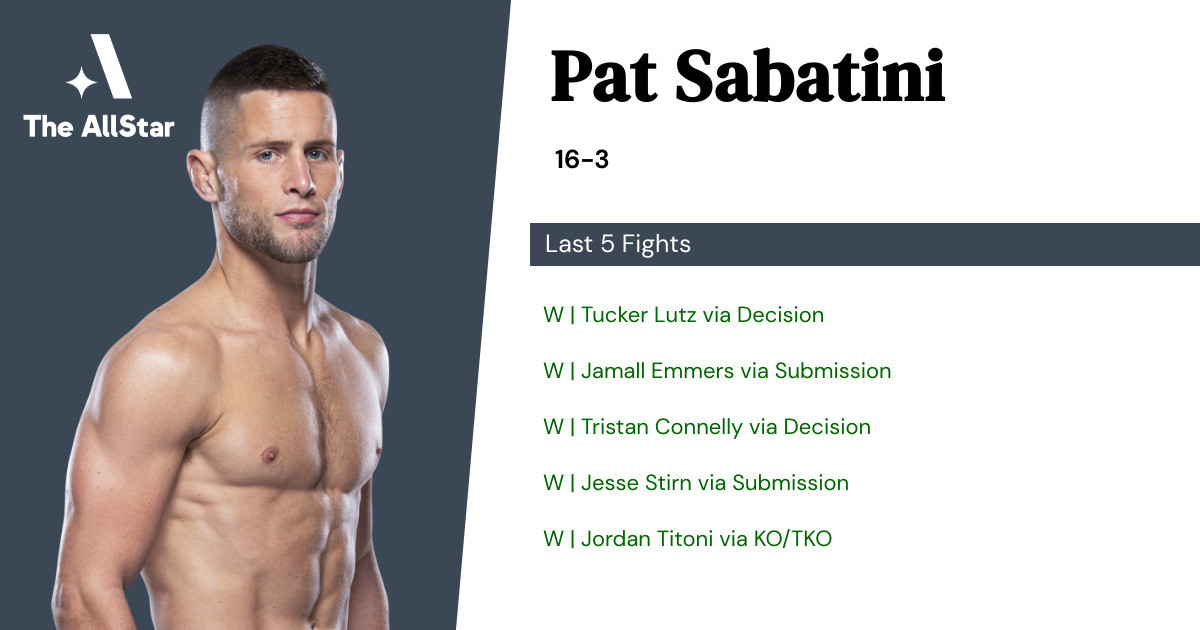 Pat Sabatini has a 75% finish rate, including 1 by knockout, 11 by submission, 4 by decision.

T.J. Laramie is looking to get back to winning ways after a loss at the hands of Darrick Minner at UFC Fight Night: Covington vs. Woodley.

Pat Sabatini vs T.J. Laramie is set to go down at UFC Fight Night – Luque vs. Muhammad 2. The fight is expected to start at around 4:30pm EST on Saturday 16th April 2022.

How to watch the Pat Sabatini vs T.J. Laramie fight with online UFC streaming

ESPN+ is the best option to live stream Pat Sabatini vs T.J. Laramie if you live in the United States. Outside of the USA, the best option is to register for UFC Fight Pass.

Where can I get the best odds for the Pat Sabatini vs T.J. Laramie UFC fight?

Use the AllStar’s directory to find the best sportsbooks and recommendations on where to place UFC bets online. If you just want to play for fun, head over to to our Fantasy UFC picks app to make your fight predictions for Pat Sabatini vs T.J. Laramie totally FREE.