Pedro Munhoz suffered his second decision loss in a row after losing to Dominick Cruz at UFC 269.

Sean O’Malley made it three finishes in a row after making quick work of Raulian Paiva in his last Octagon appearance.

Sean O’Malley will be the betting favorite with opening odds of -295.

Pedro Munhoz is the betting underdog with opening odds of +255.

Pedro Munhoz vs Sean O’Malley was first reported on May 3rd.

This Bantamweight matchup will take place on the main card at UFC 276: Adesanya vs. Cannonier.

Pedro Munhoz has won just once since 2019 after going 1-4 in his last five UFC fights. He lost his last two fights to veterans Dominick Cruz and Jose Aldo.

Munhoz’s last victory came against Jimmie Rivera in February 2021. Since knocking out Cody Garbrandt at UFC 235, Munhoz has also lost to Aljamain Sterling and Frankie Edgar.

Sean O’Malley continued his finishing streak with a first-round knockout against Raulian Paiva at UFC 269.

O’Malley has recorded three finishes in a row since his first career loss to Marlon Vera in August 2020.

Sean O’Malley is much taller at 5”11 compared to Pedro Munhoz who is 5”6. O’Malley will also have a huge 7-inch reach advantage.

The stats reveal that Sean O’Malley lands at a huge 8.26 significant strikes per minute to Munhoz’s 5.50. O’Malley also absorbs almost half the strikes as the Brazilian.

“Suga” Sean O’Malley is one of the most exciting fighters in the UFC and is always a huge draw.

This promises to be the first major test of his career in the form of veteran Pedro Munhoz.

SEAN TRIED THE WALK OFF BUT IT'S NOT OVER 🤯 #UFC260 pic.twitter.com/nJtVxGOqN8

Pedro Munhoz is one of the toughest 135lb-ers out there who can do it all.

This fight will determine if  O’Malley can hang with the Top 10 of the UFC Bantamweight Division.

This fight has big implications for the careers of both men and for the stacked Bantamweight Divison.

Sean O’Malley is climbing up the 135lbs rankings and will only be a couple of wins away from a title shot if he emerges victorious in this one.

Pedro Munhoz has lost four of his last five and will be desperate for a win.

The oddsmakers’ predictions have Sean O’Malley as the clear favorite with opening odds of -295.

Get your Pedro Munhoz vs Sean O’Malley picks in.

Pedro Munhoz vs Sean O’Malley tale of the tape 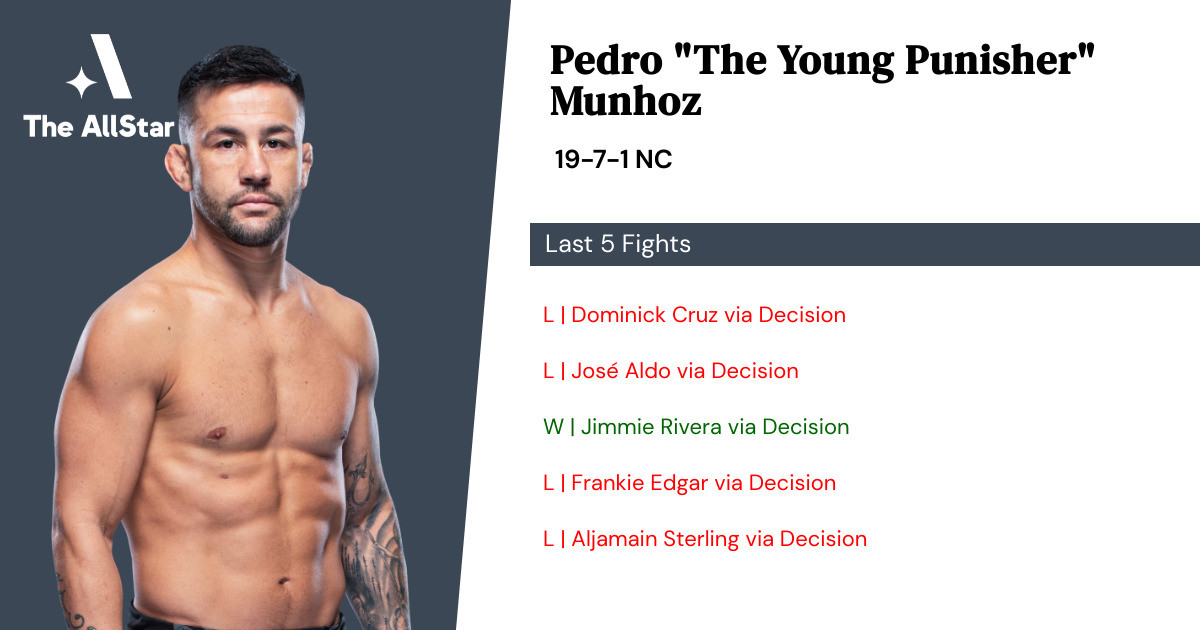 Pedro Munhoz has a 69% finish rate, including 4 by knockout, 9 by submission, 6 by decision.

Pedro Munhoz is currently on a 2 fight losing skid. 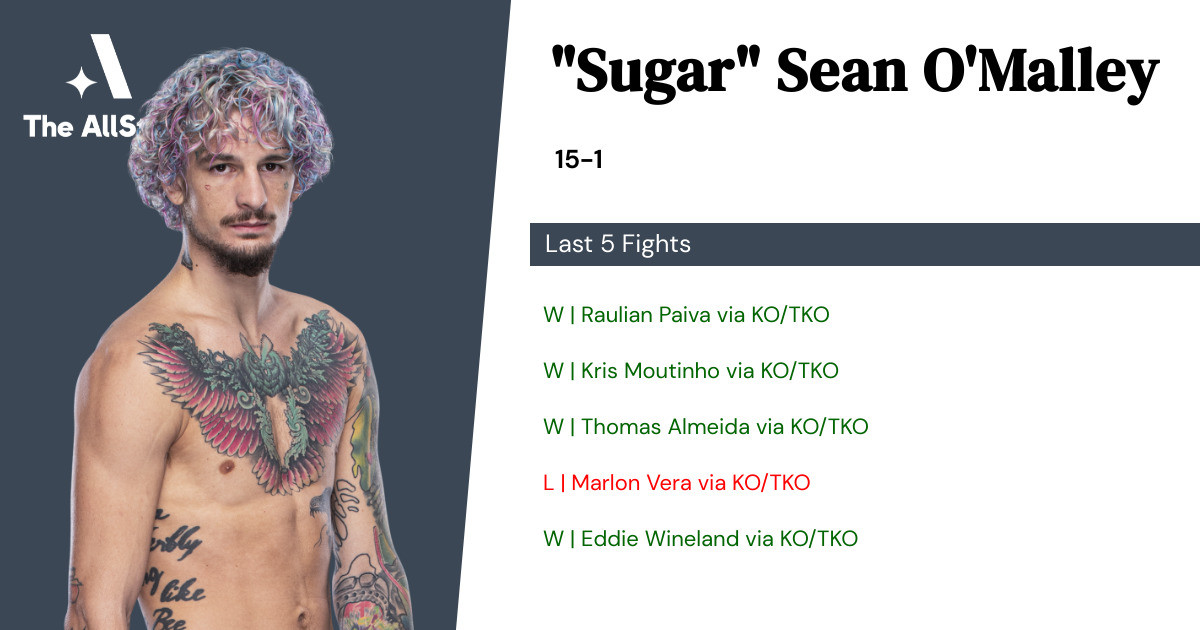 Sean O’Malley has a 80% finish rate, including 10 by knockout, 2 by submission, 3 by decision.

Pedro Munhoz vs Sean O’Malley is set to go down at UFC 276 – Adesanya vs. Cannonier. The fight is expected to start at around 9:00pm EST on Saturday 2nd July 2022.

ESPN+ is the best option to live stream Pedro Munhoz vs Sean O’Malley if you live in the United States. Outside of the USA, the best option is to register for UFC Fight Pass.

Where can I get the best odds for the Pedro Munhoz vs Sean O’Malley UFC fight?

Use the AllStar’s directory to find the best sportsbooks and recommendations on where to place UFC bets online. If you just want to play for fun, head over to to our Fantasy UFC picks app to make your fight predictions for Pedro Munhoz vs Sean O’Malley totally FREE.