Poliana Botelho vs Karine Silva is set to go down at UFC Fight Night: Volkov vs. Rozenstruik at 10:00pm EST on Saturday 4th June 2022 in a 125lbs matchup.

Poliana Botelho is on a two-fight skid following a narrow split decision defeat to Luana Carolina last May.

Karine Silva will be making her UFC debut after an impressive showing on Dana White’s Contender Series in October.

This is a pick’em fight, with neither fighter strongly favored to win.

Karine Silva opened as a -120 very slight betting favorite. Placing a bet on Silva means you would need to bet $120 in order to win $100.

This matchup is expected to take place on the main card at UFC Fight Night: Volkov vs. Rozenstruik.

Botelho got her UFC career off to a great start with three wins out of four. She is now 3-3 in the promotion, with her last win coming against Lauren Mueller over three years ago.

The Brazilian is now riding a five-fight win streak, with all five of her victories coming by finish.

Poliana Botelho will be the taller woman in this matchup at 5”8 compared to Silva who is 5”5. However, both fighters will have an identical 67-inch reach.

Botelho is older than her opponent at 33 years old, while Karine Silva is 28.

This will be a fascinating matchup between a rising star and a promotional mainstay. Karine Silva has plenty of hype behind her with an impressive finishing rate.

She will face Botelho who is also more than capable of finishing her opponent by knockout.

The stakes are high for both women in this fight. Another defeat would make it three in a row for Poliana Botelho, who may be fighting for her future in the UFC here.

Karine Silva is making her UFC debut and will want her career to get off to a flying start. Don’t miss this one.

The oddsmakers’ predictions have Karine Silva as the slight betting favorite with opening odds of -120.

Get your Poliana Botelho vs Karine Silva picks in.

Poliana Botelho vs Karine Silva tale of the tape 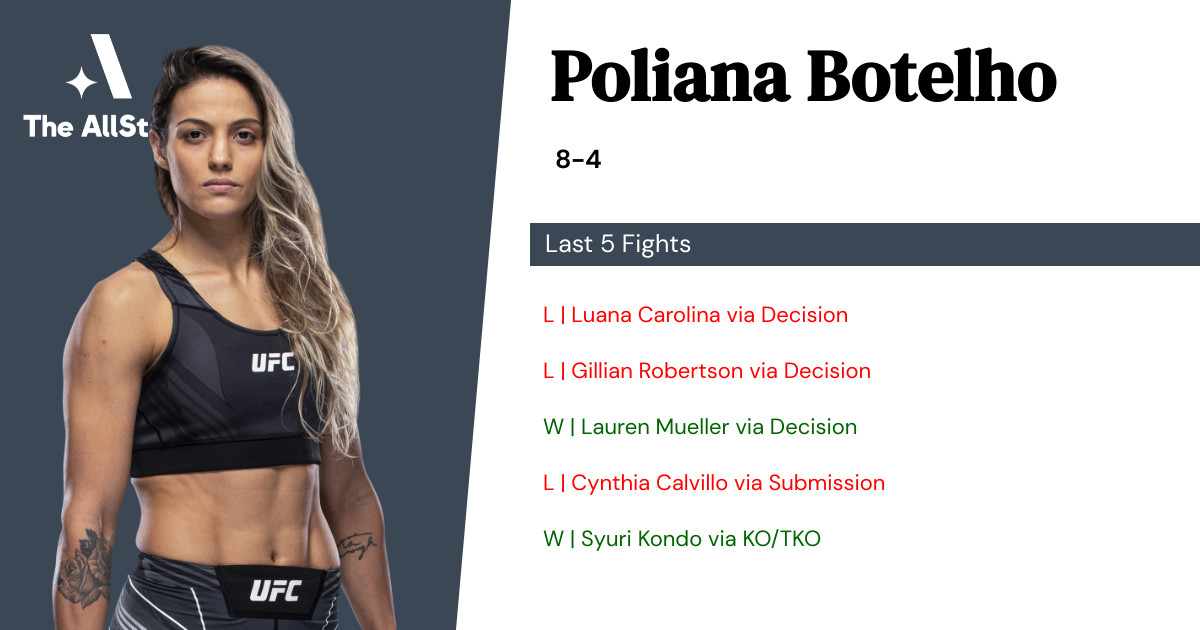 Poliana Botelho has a 75% finish rate, including 6 by knockout, 2 by decision.

Poliana Botelho is currently on a 2 fight losing skid.

Poliana Botelho vs Karine Silva is set to go down at UFC Fight Night – Volkov vs. Rozenstruik. The fight is expected to start at around 10:00pm EST on Saturday 4th June 2022.

ESPN+ is the best option to live stream Poliana Botelho vs Karine Silva if you live in the United States. Outside of the USA, the best option is to register for UFC Fight Pass.

Where can I get the best odds for the Poliana Botelho vs Karine Silva UFC fight?

Use the AllStar’s directory to find the best sportsbooks and recommendations on where to place UFC bets online. If you just want to play for fun, head over to to our Fantasy UFC picks app to make your fight predictions for Poliana Botelho vs Karine Silva totally FREE.