Tabatha Ricci will be the betting favorite with opening odds of -175.

Polyana Viana is the betting underdog with opening odds of +150.

This fight will take place on the main card at UFC Fight Night: Holm vs. Vieira.

Polyana Viana has turned things around in the past 18 months with two consecutive first-round wins. The Brazilian secured an armbar submission against Mallory Martin at UFC 258 after beating Emily Whitmire, again via armbar, in August 2020.

The woman on the left is @UFC fighter Polyana Viana.

The man on the right tried to steal her phone and had his face rearranged. pic.twitter.com/CGb3bxLeJd

Viana got her UFC career off to a great start with a first-round rear-naked choke win in 2018. However, she then lost three fights in a row before her recent resurgence.

Dominating start to the 2nd for Ricci

Polyana Viana is the far taller woman in this matchup at 5”5 compared to her opponent who is 5”1.

Viana will also have a significant 5-inch reach advantage in this matchup. She will be the more experienced fighter with 16 pro fights to Ricci’s 7.

This will be a fascinating matchup between two talented grappling experts. Polyana Viana has finished all three of her UFC victories by submission, while Ricci also comes from a jiu-jitsu background.

Many predict this one to play out on the mat, but there is every chance their respective grappling prowess will cancel each other out and it will remain on the feet.

Both fighters enter this matchup off the back of a win and look to climb up the Strawweight division rankings.

Polyana Viana could make it three-in-a-row with a victory as the betting underdog. There is a lot at stake in this one.

The oddsmakers’ predictions have Tabatha Ricci as the betting favorite with opening odds of -180.

Get your Polyana Viana vs Tabatha Ricci picks in.

Polyana Viana vs Tabatha Ricci tale of the tape 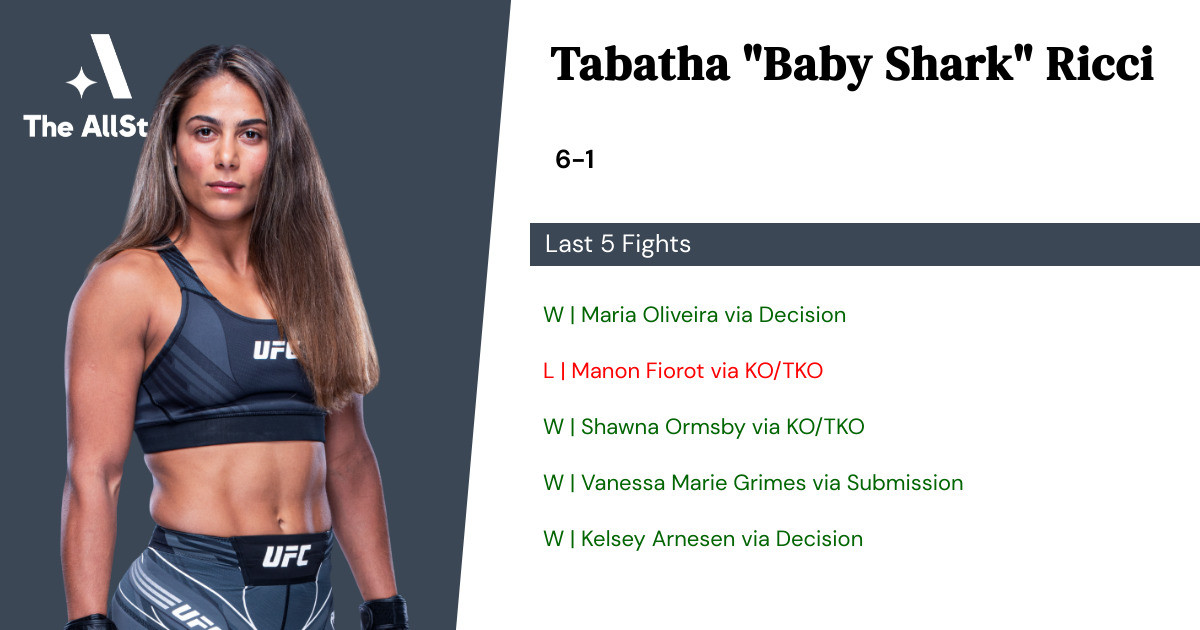 Tabatha Ricci has a 50% finish rate, including 1 by knockout, 2 by submission, 3 by decision.

Tabatha Ricci is looking to put together a winning streak, having last beaten Maria Oliveira at UFC Fight Night: Costa vs. Vettori.

Polyana Viana vs Tabatha Ricci is set to go down at UFC Fight Night – Holm vs. Vieira. The fight is expected to start at around 7:30pm EST on Saturday 21st May 2022.

ESPN+ is the best option to live stream Polyana Viana vs Tabatha Ricci if you live in the United States. Outside of the USA, the best option is to register for UFC Fight Pass.

Where can I get the best odds for the Polyana Viana vs Tabatha Ricci UFC fight?

Use the AllStar’s directory to find the best sportsbooks and recommendations on where to place UFC bets online. If you just want to play for fun, head over to to our Fantasy UFC picks app to make your fight predictions for Polyana Viana vs Tabatha Ricci totally FREE.