Young prospects Punahele Soriano (8-1) and Nick Maximov (7-0) square off in this exciting co-main event at UFC Vegas 47: Hermansson vs Strickland.

After following his impressive first-round KO UFC debut with another knockout win against Dusko Todorovic, Soriano suffered his first career loss in a bruising battle with Brendan Allen in his last fight.

Maximov is undefeated as a pro and won his UFC debut at UFC 266, beating Cody Brundage by decision.

Punahele Soriano opened as a -195 betting favorite. Placing a bet on Soriano means you would need to bet $195 in order to win $100.

The fight was first announced by BJPenn.com on November 13th, 2021.

These two up-and-coming prospects will fight in the co-main event at UFC Vegas 47: Hermansson vs Strickland.

After a promising UFC debut at UFC 245, Soriano grappled with a series of injuries that kept him out of the Octagon for over a year. He returned to action with an impressive first-round KO against Dusko Todorovic.

His last fight against Brendan Allen was a bonafide scrap but didn’t go his way, with every major media outlet picks giving Allen the victory. This was Soriano’s first career loss.

24-year-old Maximov continued his perfect professional record with a decision victory over Cody Brundage at UFC 266. Over the fight, Maximov showcased his strong grappling skills and dominated on the ground.

Before his UFC debut, Maximov competed in Dana White’s Contender Series. Ordinarily a Middleweight, Maximov went all the way up to Heavyweight and earned a decision win over Oscar Cota.

Soriano lands more significant strikes per minute at 4.44 compared to Maximov with 1.70. On the contrary, Maximov lands double the takedowns with an average of 3.00 per 15 minutes.

Maximov is the significantly younger fighter at just 24 years old, while Soriano is 29.

Punehele Soriano has one-punch knockout power in his hands, as he demonstrated in his first two UFC fights. In the blink of an eye, he can put any opponent out.

That's how you start the main card!

As a Nick/Nate Diaz protege, Maximov brings a precocious understanding of jiu-jitsu to the Octagon. He will have to get past Soriano’s perfect TD defence to get the submission.

The odds are this fight pans out as a striker vs grappler matchup. However, after training at several boxing gyms, Maximov told the AllStar that we may be “surprised” by his hands in this fight.

Soriano is looking to bounce back from his first career loss and continue his impressive UFC start. While Maximov isn’t a huge scalp, it will prove that Soriano can see off formidable grapplers and submission artists.

Maximov’s unbeaten professional record is at stake. With just one fight in the UFC so far, a big win at UFC Vegas 47 and Maximov could be the next ‘Nick Diaz Army’ soldier to shoot to stardom.

Most predictions on this fight will hinge on whether or not it goes to the ground. Maximov, despite his young age, is an exceptional jiu-jitsu practitioner.

Soriano’s main threat lies in his heavy hands. If he can keep the fight standing, his polished striking skills are likely to get him the win.

UFC fighter and coach “The” James Krause said of the matchup:

“I don’t see Maximov getting Puna down. Maximov is relatively untested, he hasn’t really fought anybody.”

Maximov expects a dangerous fight. He told The AllStar:

“Puna is dangerous. He has a wild, dangerous, crazy style.”

Maximov picks a late-finish against Soriano. His predictions have him winning in the second or third round.

Punahele Soriano predicts he will bounce back from his first career loss and noted Maximov’s qualities:

Punahele Soriano vs Nick Maximov is set to go down at UFC Vegas 47: Hermansson vs. Strickland at 11:00pm EST on Saturday 5th February 2022 in a 185lbs matchup.

Punahele Soriano opened as a -195 betting favorite. Placing a bet on Soriano means you would need to bet $195 in order to win $100.

Where to bet on Punahele Soriano vs Nick Maximov

Punahele Soriano vs Nick Maximov tale of the tape 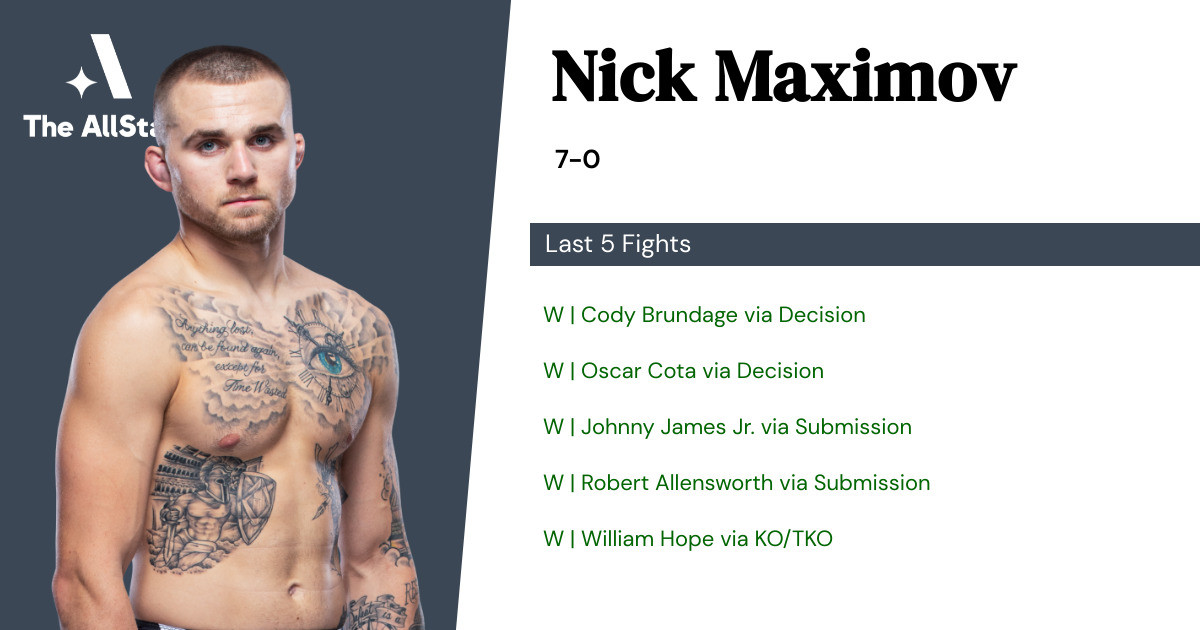 Nick Maximov has a 72% finish rate, including 2 by knockout, 3 by submission, 2 by decision. 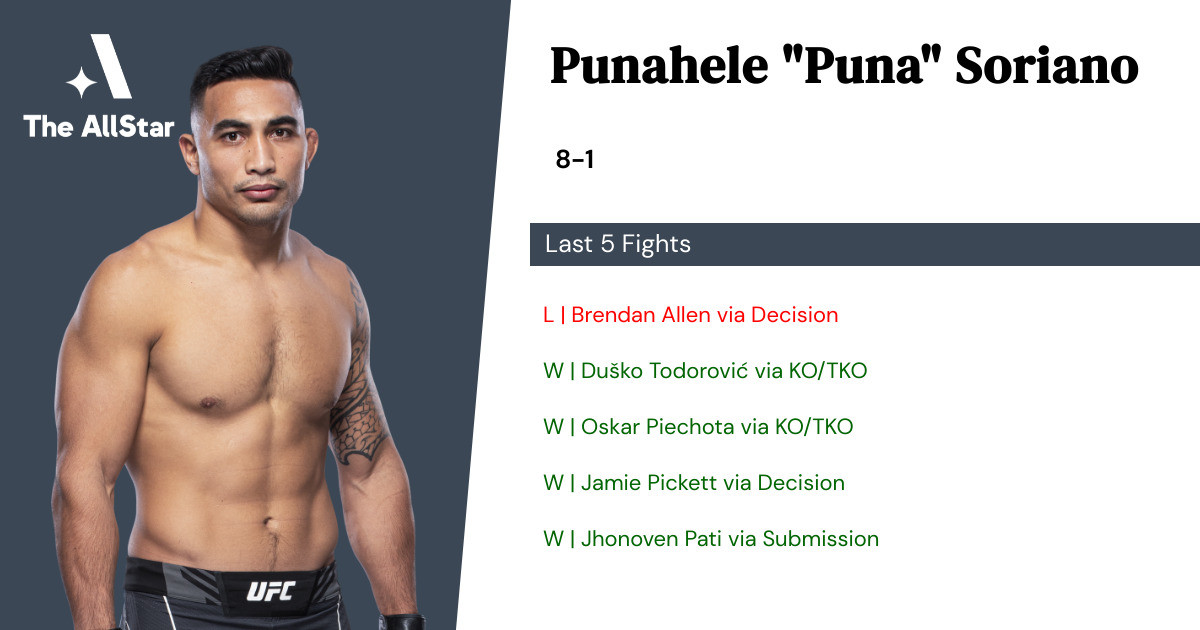 Punahele Soriano has a 88% finish rate, including 5 by knockout, 2 by submission, 1 by decision.

Punahele Soriano is looking to get back to winning ways after a loss at the hands of Brendan Allen at UFC Fight Night: Sandhagen vs. Dillashaw.

Punahele Soriano vs Nick Maximov is set to go down at UFC Vegas 47 – Hermansson vs. Strickland. The fight is expected to start at around 11:00pm EST on Saturday 5th February 2022.

ESPN+ is the best option to live stream Punahele Soriano vs Nick Maximov if you live in the United States. Outside of the USA, the best option is to register for UFC Fight Pass.

Where can I get the best odds for the Punahele Soriano vs Nick Maximov UFC fight?