Rafa Garcia earned his first win in the UFC at the third attempt with a unanimous decision victory over Natan Levy in November.

Jesse Ronson saw his UFC return end in a no contest after his submission win was overturned after returning a positive doping sample.

Jesse Ronson will be the slight favorite with opening betting odds of -115.

Rafa Garcia is the betting underdog with opening odds of + 105.

This Welterweight fight is expected to take place on the prelims of UFC on ESPN+ 64: Luque vs. Muhammad 2.

Jesse Ronson will be returning from a 20-month USADA suspension after he failed a drug test after his 2020 fight against Nicolas Dalby.

Rafa Garcia showed his grit by grinding out a unanimous decision victory over Natan Levy in his last Octagon outing.

Heavy output from both guys right out the gates ⚡️

The Mexican is a Combate veteran who entered the UFC on the back of a 12-fight winning streak. However, he lost his first two UFC fights against Nasrat Haqparast and Chris Gruetzemacher by decision.

Jesse Ronson returned to the UFC after a six-year absence, finishing Nicolas Dalby by first-round submission. However, an adverse USADA test finding led to the fight being declared a no contest.

Ronson first fought in the UFC back in 2013. He lost all three of his fights in the promotion, all of which came by split decision.

Jesse Ronson is the taller fighter in this matchup at 5”10 compared to his opponent who is 5”7. Ronson will also have a 2 inch reach advantage.

Rafa Garcia is younger at 27 years old, while Ronson is 36. The American brings double the pro MMA experience with 31 fights to Garcia’s 15.

Over his career, Jesse Ronson has maintained a finishing rate of over 80%, while Garcia has finished 70% of his victories, including seven by submission.

This fight promises to be a scrap from the opening bell. Both of these fighters bring incredible toughness and the ability to finish their opponents on the ground or on the feet.

Rafa Garcia turned things around after a run of two defeats with his most recent victory.

Ronson thought he had earned his first UFC victory before the result was scrapped due to an adverse drug test.

Both of these fighters have a lot on the line in this fight.

The oddsmakers’ predictions are tight in this one. The betting odds slightly favor Jesse Ronson who opens as a -115 favorite.

Get your Rafa Garcia vs Jesse Ronson picks in.

Rafa Garcia vs Jesse Ronson tale of the tape 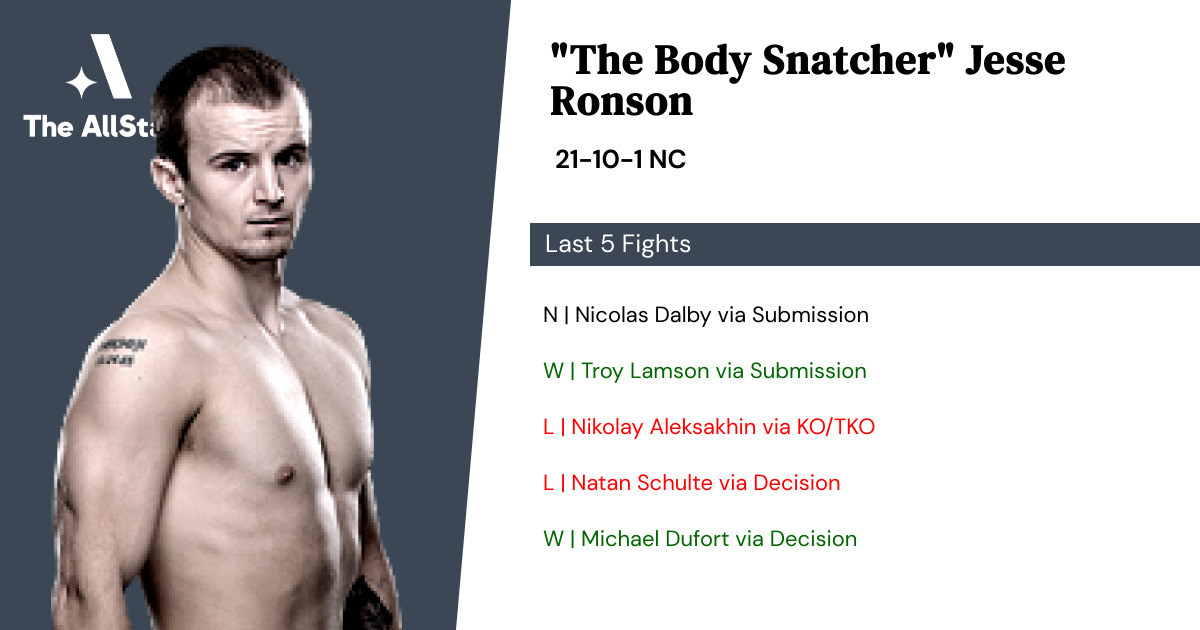 Jesse Ronson has a 81% finish rate, including 9 by knockout, 8 by submission, 4 by decision. 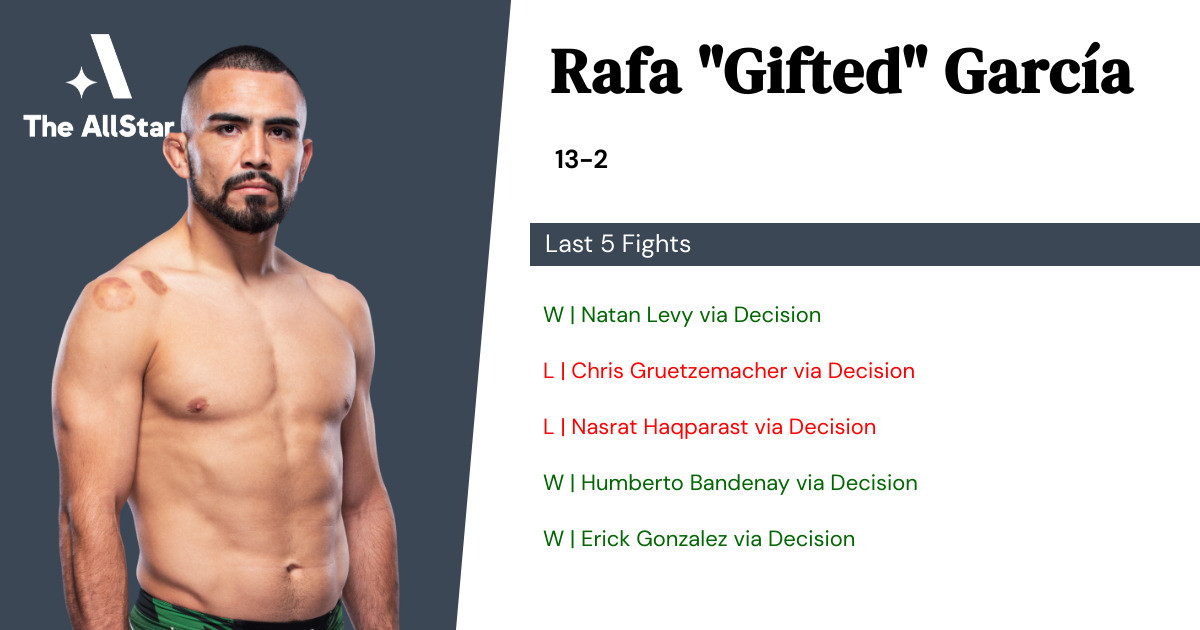 Rafa García has a 70% finish rate, including 1 by knockout, 7 by submission, 4 by decision.

Rafa García is looking to put together a winning streak, having last beaten Natan Levy at UFC Fight Night: Vieira vs. Tate.

Rafa Garcia vs Jesse Ronson is set to go down at UFC Fight Night – Luque vs. Muhammad 2. The fight is expected to start at around 8:30pm EST on Saturday 16th April 2022.

ESPN+ is the best option to live stream Rafa Garcia vs Jesse Ronson if you live in the United States. Outside of the USA, the best option is to register for UFC Fight Pass.

Where can I get the best odds for the Rafa Garcia vs Jesse Ronson UFC fight?

Use the AllStar’s directory to find the best sportsbooks and recommendations on where to place UFC bets online. If you just want to play for fun, head over to to our Fantasy UFC picks app to make your fight predictions for Rafa Garcia vs Jesse Ronson totally FREE.