Rafael dos Anjos hasn’t fought in over a year since his victory over late-replacement Paul Felder in November 2020. This fight was dos Anjos’ return to the Lightweight division after an eight-fight run at 170lbs.

Renato Moicano is coming off a second-round submission win over Alexander Hernandez. He steps into this fight just three weeks after his victory at UFC 271.

Dos Anjos opened as the oddsmakers’ favorite with betting odds of -180. Moicano will be the betting underdog with opening odds of +160.

This fight was first reported on March 1st, just 5 days before UFC 272. Dos Anjos’ initial opponent, Rafael Fiziev, tested positive for COVID and pulled out of the fight.

Renato Moicano will step in on just four days notice to fight Rafael dos Anjos in the co-main event of #UFC272 on Saturday, sources told @marc_raimondi.

The fight has been verbally agreed to and both sides are awaiting contracts. pic.twitter.com/YDH6wYpshz

Renato Moicano stepped up with less than a weeks’ notice. This co-main event will be contested at a 160lbs Catchweight.

Rafael dos Anjos made a winning return to the Lightweight division with a split decision victory over Paul Felder. Every major media outlet pick had dos Anjos winning comfortably.

First round finish!!@RdosAnjosMMA gets the first round sub at #UFC215!!

Prior to his last fight, dos Anjos went 4-4 in the 170lbs division, going 1-4 in his last 5 at Welterweight. Notable victories in the division include submission wins against Kevin Lee and Neil Magny.

Renato Moicano is on a two-fight winning streak with successive rear-naked choke wins against Alexander Hernandez and Jai Herbert.

The Brazilian submission artist in fact lost to dos Anjos’ original opponent, Rafael Fiziev, back in December 2020. Moicano has gone 3-1 since making the step-up to Lightweight in 2020.

Dos Anjos is 5”8 tall, while Moicano is 5″11. Moicano will have a 2-inch reach advantage in this fight.

Dos Anjos is considerably older at 37 years old compared to Moicano who is 32.

Dos Anjos has far more fight experience than his opponent with 43 professional fights, while Moicano has 21 fights on his record.

Moicano lands more significant punches than dos Anjos at 5.12 per minute. He also edges it in the takedown department with 2.14 TD’s per 15 minutes to dos Anjos’ 1.93.

Despite the disappointment of losing Fiziev, this fight still promises a lot. Moicano is extremely dangerous with submissions and his grappling prowess means dos Anjos is likely to keep this standing.

Rafael dos Anjos is the former UFC Lightweight champion with world-class skills in every department. He has 10 submission wins on his record but is more than capable of securing the KO.

This is still a significant fight in the future of the Lightweight division, albeit contested at a short-notice 160lbs Catchweight.

Moicano has gone 3-1 at Lightweight, with his only loss coming to Fiziev. The former champion dos Anjos still believes he has what it takes to challenge for the belt.

The bookies’ predictions have Rafael dos Anjos as the favorite in this one with opening odds of -180.

Get your Rafael dos Anjos vs Renato Moicano picks in.

Rafael dos Anjos vs Renato Moicano tale of the tape

Renato Moicano has the better record against the shared opposition, at 1-0 to Rafael dos Anjos’s record of 0-1 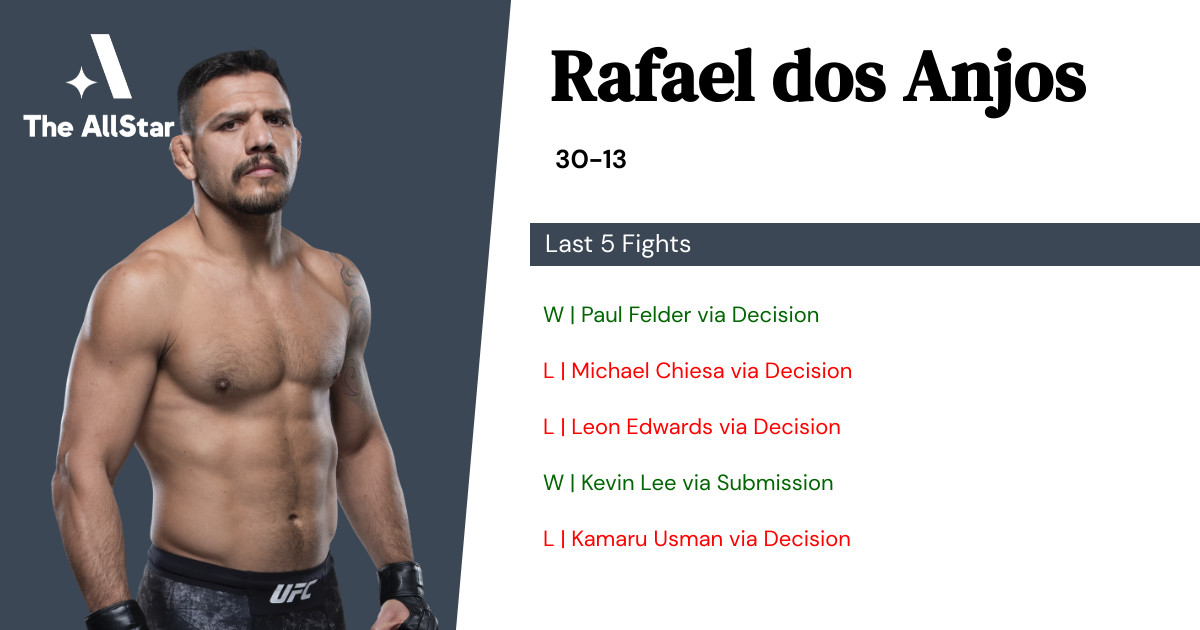 Rafael dos Anjos has a 50% finish rate, including 5 by knockout, 10 by submission, 15 by decision.

Rafael dos Anjos is looking to put together a winning streak, having last beaten Donald Cerrone at Submission Underground 19. 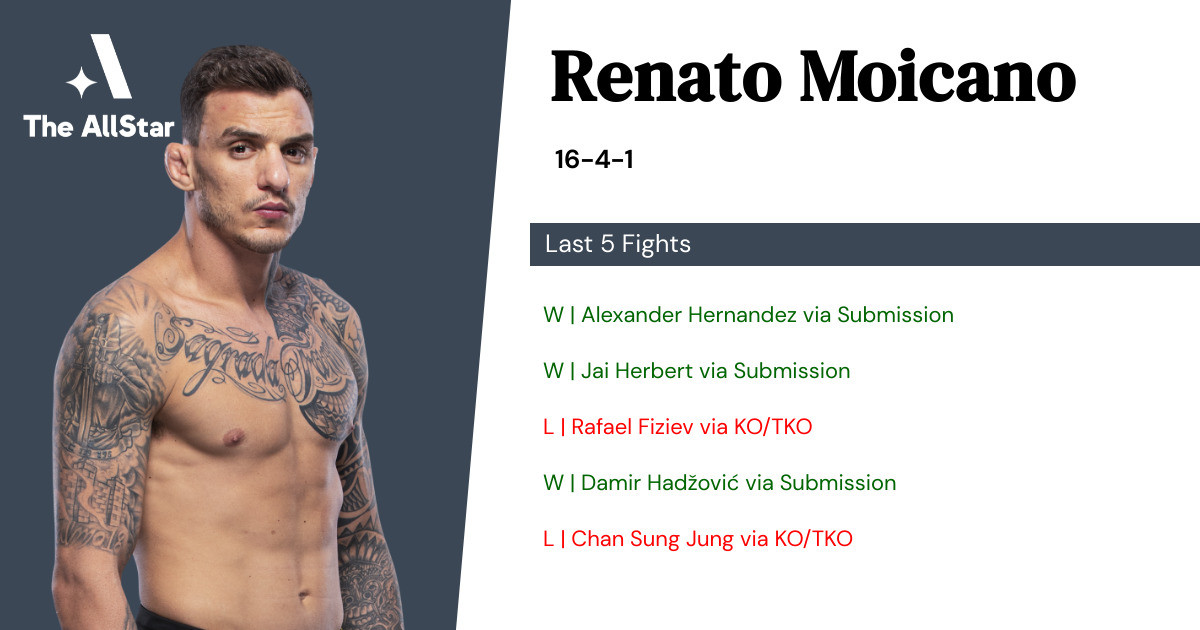 Renato Moicano has a 57% finish rate, including 9 by submission, 7 by decision.

Rafael dos Anjos vs Renato Moicano is set to go down at UFC 272 – Covington vs. Masvidal. The fight is expected to start at around 10:30pm EST on Saturday 5th March 2022.

ESPN+ is the best option to live stream Rafael dos Anjos vs Renato Moicano if you live in the United States. Outside of the USA, the best option is to register for UFC Fight Pass.

Where can I get the best odds for the Rafael dos Anjos vs Renato Moicano UFC fight?

Use the AllStar’s directory to find the best sportsbooks and recommendations on where to place UFC bets online. If you just want to play for fun, head over to to our Fantasy UFC picks app to make your fight predictions for Rafael dos Anjos vs Renato Moicano totally FREE.