Raulian Paiva vs Sergey Morozov is set to go down at UFC Fight Night: Tsarukyan vs. Gamrot at 5:00pm EST on Saturday 25th June 2022 in a 135lbs matchup.

Raulian Paiva saw his three-fight winning streak come to an end after he was knocked out in the first round by Sean O’Malley.

Sergey Morozov was involved in an epic battle with Douglas Silva de Andrade, eventually losing the fight by submission in Round 2.

Sergey Morozov will be the betting favorite with opening odds of -130.

Raulian Paiva is the betting underdog with opening odds of +120.

This Bantamweight scrap will be on the prelims at UFC Fight Night: Tsarukyan vs. Gamrot.

Raulian Paiva faced rising star Sean O’Malley at UFC 269 in December, losing the fight by knockout with just 18 seconds to go in Round 1.

Paiva had been on a three-fight winning streak with consecutive victories over Mark De La Rosa, Zhalgas Zhumagulov and Kyler Phillips.

Sergey Morozov suffered his second defeat in the UFC in a back-and-forth scrap with Douglas Silva de Andrade. Despite badly hurting his opponent, Morozov lost the fight by submission in a Fight of the Night winner.

🇰🇿 MOROZOV PUT HIM DOWN WITH THE UPPERCUT! #UFC271 pic.twitter.com/84He8wseNg

The Ukrainian has registered just a single victory in the UFC after beating Khalid Taha last July.

Raulian Paiva will be the taller fighter in this matchup at 5”8, while Morozov is 5”6. The Brazilian will also have a small 2-inch reach advantage.

Paiva is younger at 26 years old but has more pro-MMA experience with 25 fights. The 32-year-old Morozov has 22 pro fights on his record.

This is an excellent matchup between two dangerous Bantamweights. Sergey Morozov was involved in one of the best fights of 2022 so far, showcasing his dangerous striking skills.

Raulian Paiva was working his way up the division before running into the highly-touted Sean O’Malley. He will want to remind fans of what he can do.

Sergey Morozov is now 1-2 in the UFC despite impressing in his last couple of fights. He will know that another defeat here could spell the end of his UFC stint.

Raulian Paiva needs to get back on the horse with a win, which would take him to four wins from five. A victory for either man would see them knocking on the door of the Top 15 rankings.

The oddsmakers’ predictions have Sergey Morozov as the slight betting favorite with opening odds of -130.

Get your Raulian Paiva vs Sergey Morozov picks in.

Raulian Paiva vs Sergey Morozov tale of the tape 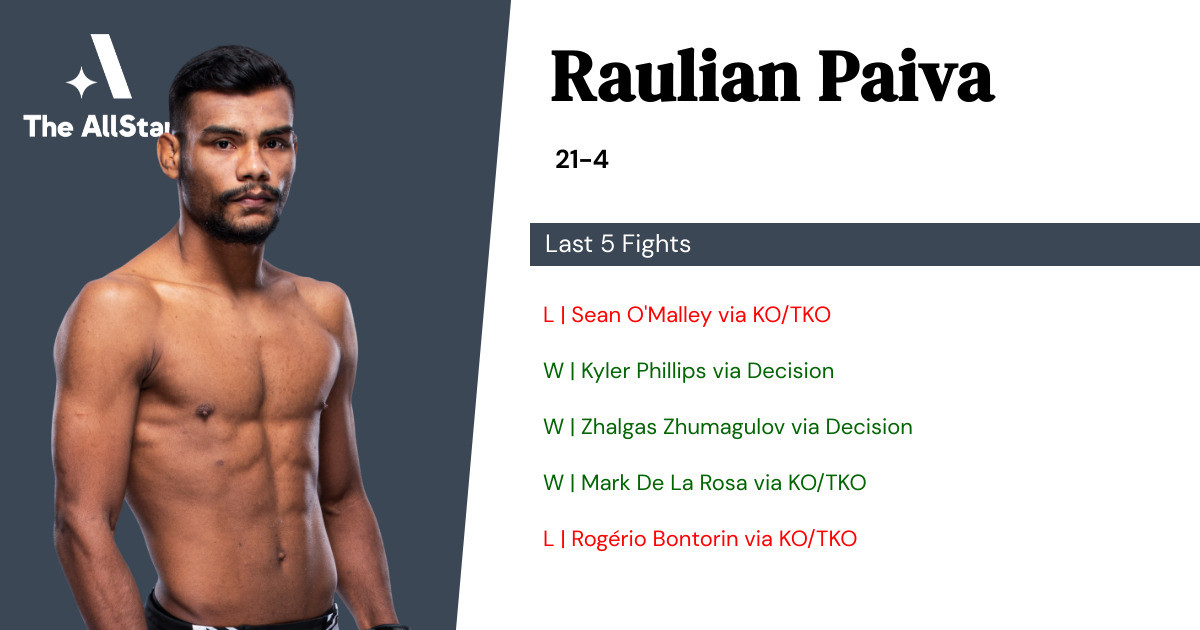 Raulian Paiva has a 34% finish rate, including 3 by knockout, 4 by submission, 14 by decision.

Raulian Paiva is looking to get back to winning ways after a loss at the hands of Sean O’Malley at UFC 269: Oliveira vs. Poirier. 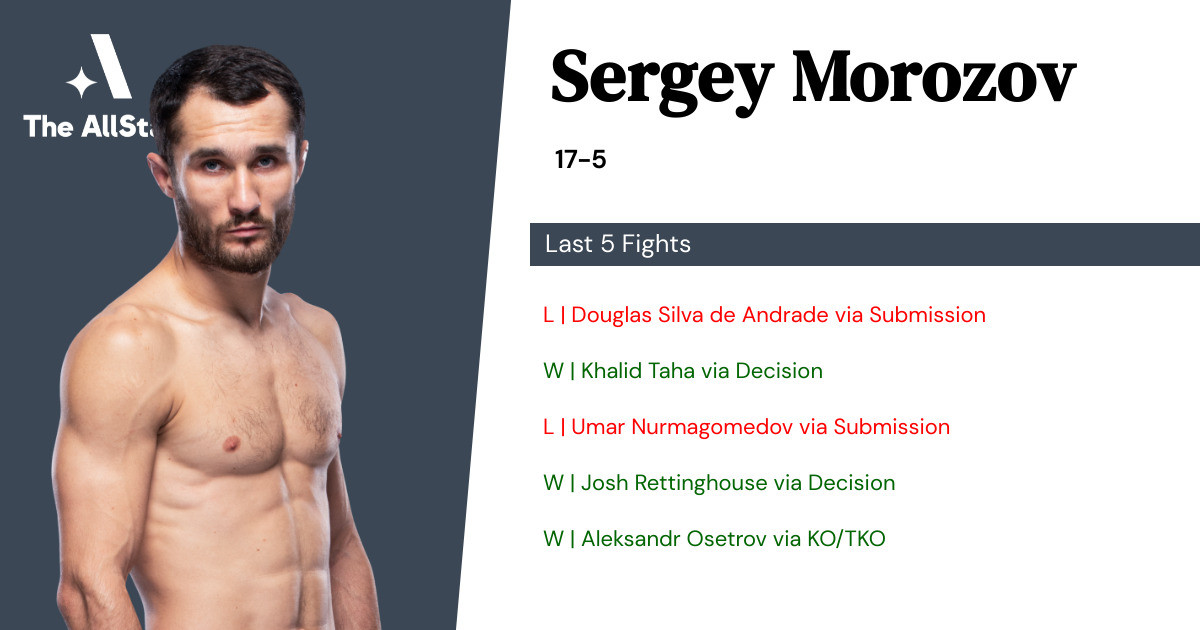 Sergey Morozov has a 65% finish rate, including 8 by knockout, 3 by submission, 6 by decision.

Sergey Morozov is looking to get back to winning ways after a loss at the hands of Douglas Silva de Andrade at UFC 271: Adesanya vs. Whittaker 2.

Raulian Paiva vs Sergey Morozov is set to go down at UFC Fight Night – Tsarukyan vs. Gamrot. The fight is expected to start at around 5:00pm EST on Saturday 25th June 2022.

ESPN+ is the best option to live stream Raulian Paiva vs Sergey Morozov if you live in the United States. Outside of the USA, the best option is to register for UFC Fight Pass.

Where can I get the best odds for the Raulian Paiva vs Sergey Morozov UFC fight?

Use the AllStar’s directory to find the best sportsbooks and recommendations on where to place UFC bets online. If you just want to play for fun, head over to to our Fantasy UFC picks app to make your fight predictions for Raulian Paiva vs Sergey Morozov totally FREE.