Ronnie Lawrence got his UFC career off to a flyer with a third-round TKO victory over Vince Cachero in February 2021.

Mana Martinez was also successful in his UFC debut with a split-decision win over Guido Cannetti.

Both of these fighters competed on Dana White’s Contender Series. Lawrence won his fight, while Martinez lost via submission.

Check with the AllStar for the latest betting odds on Ronnie Lawrence vs Mana Martinez.

News of Ronnie Lawrence vs Mana Martinez first broke on November 11th, 2021, with the fight scheduled for the UFC 271 prelims.

Lawrence was set to fight Trevin Jones until weight-cut complications led to the fight being called off. Martinez also had a fight against Jones lined up before withdrawing.

Ronnie Lawrence showcased his excellent all-round game in his last fight against Vince Cachero. Lawrence eventually ended the fight via ground-and-pound in Round 3.

Lawrence got his shot in the UFC with a dominant victory on Dana White’s Contender Series. Other than a decision loss to Steve Garcia in Bellator, Lawrence has won every professional fight.

Mana Martinez edged a split-decision win over Guido Cannetti in his UFC debut. 11 out of 13 major media outlet picks also had Martinez winning the fight.

Shots are flying and shots are landing! 🤜 #UFCVegas35 pic.twitter.com/DTklJJEtyc

Martinez got his shot in the UFC despite losing his Contender Series opportunity to Drako Rodriguez. Martinez eventually convinced the top brass of his worth on ‘Dana White’s Lookin’ For a Fight’ series, winning his bout with a 32-second knockout.

Mana Martinez is the taller fighter at 5”10 compared to Lawrence who is 5”8. Both men have a similar reach.

Despite being three years younger than his opponent, Martinez is slightly more experienced with 11 pro fights, while Lawrence has fought professionally 8 times.

This fight puts two young, highly talented prospects up against each other. Prior to his UFC debut, Martinez had a 100% finish rate and boasts serious knockout power in his hands.

Ronnie Lawrence can win the fight in a number of ways and is particularly known for his dominant grappling prowess.

Both men are in the early stages of their UFC careers and will want to impress the fans. Martinez will be keen for a dominant performance after a narrow victory in his debut. Lawrence is riding a four-fight win streak and will want to build on his excellent debut.

The oddsmakers’ predictions have Lawrence as the betting favorite. The odds show that Martinez is predicted to lose this one.

Mana Martinez spoke with The AllStar and predicts a finish:

Get your Ronnie Lawrence vs Mana Martinez picks in.

Where to bet on Ronnie Lawrence vs Mana Martinez

Ronnie Lawrence vs Mana Martinez tale of the tape

Mana Martinez has an 89% finish rate, including 8 by knockout, 1 by decision. 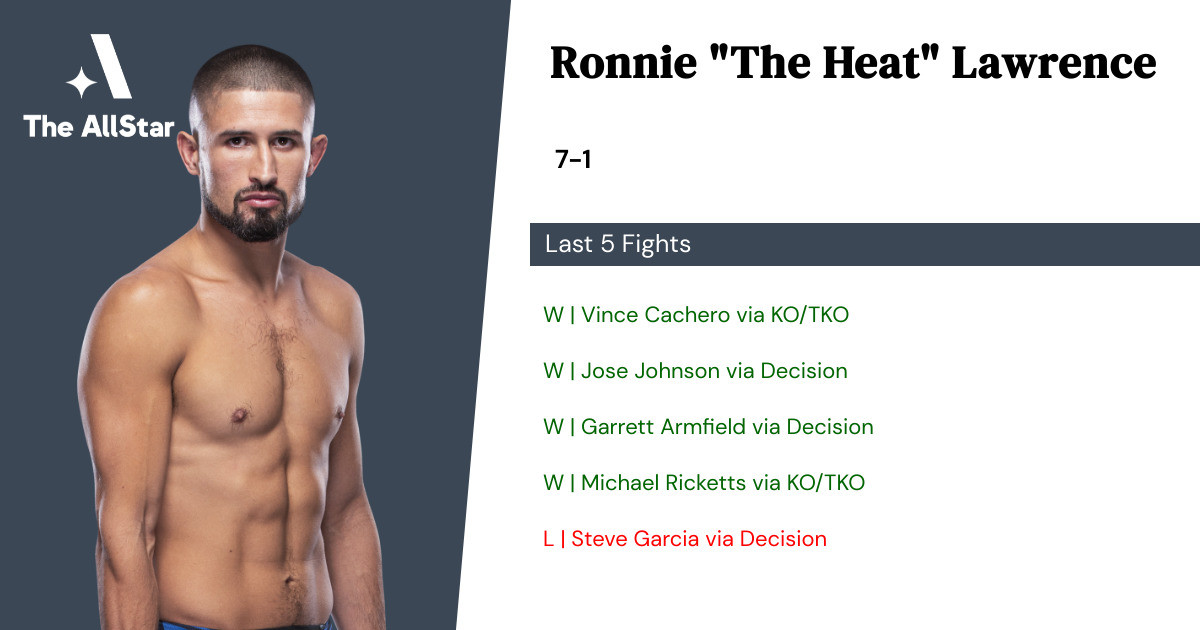 Ronnie Lawrence has a 58% finish rate, including 4 by knockout, 3 by decision.

Ronnie Lawrence vs Mana Martinez is set to go down at UFC 271 – Adesanya vs. Whittaker 2. The fight is expected to start at around 7:00pm EST on Saturday 12th February 2022.

ESPN+ is the best option to live stream Ronnie Lawrence vs Mana Martinez if you live in the United States. Outside of the USA, the best option is to register for UFC Fight Pass.

Where can I get the best odds for the Ronnie Lawrence vs Mana Martinez UFC fight?