Sam Alvey vs Brendan Allen is set to go down at UFC Vegas 47: Hermansson vs. Strickland at 7:30pm EST on Saturday 5th February 2022 in a 205lbs matchup.

UFC veteran Sam Alvey has lost six of his last seven UFC fights and hasn’t won a fight in the promotion since a 2018 victory over Gian Villante.

Brendan Allen will enter this fight on just 5 days’ notice after Alvey’s initial opponent Phil Hawes dropped out. Allen lost his last fight to Chris Curtis via TKO in December.

Brendan Allen is heavily favored by the oddsmakers as a -425 betting favorite. Placing a bet on Allen means you would need to bet $425 in order to win $100.

Sam Alvey was initially set to face Ian Heinisch before Heinisch was forced out due to injury. Phil Hawes agreed to step in and face Alvey, with the rescheduled fight announced on December 27th, 2021.

However, Hawes dropped out in fight week before Brendan Allen agreed to step up on short notice. Allen took the fight with just five days’ notice.

Notably, this fight will be contested at Light Heavyweight (205lbs). Alvey’s fight against Hawes was set to take place at Middleweight (185lbs).

Despite racking up a 10-5 record in his first 15 UFC appearances, Sam Alvey has gone 0-6-1 in his last seven fights.

His most recent fight was a split decision loss to Wellington Turman. Alvey lost the fight despite his opponent suffering two point-deductions in the final round.

Brendan Allen lost his last UFC fight to Chris Curtis via TKO in the second round. Just like this fight, Allen entered his bout with Curtis as the heavy favorite.

Prior to his recent loss, Allen was on a two-fight win streak with victories against Punahele Soriano and Karl Roberson.

Sam Alvey and Brendan Allen are evenly matched in both height and reach. Both fighters are 6”2 tall with a 75-inch reach.

Brendan Allen has mixed in the takedowns far more often than Alvey, with an average of 1.15 TD’s per 15 minutes compared to Alvey’s 0.07.

Allen is also likelier to go for a submission with an average of 1.6 submission attempts per 15 minutes to Alvey’s 0.1.

Alvey is the much-older fighter at 35 years old compared to Allen who is just 26 years old.

Short notice fights like these are always fascinating to watch. While Brendan Allen is predicted to win by the bookies, you never know when a fighter is stepping up with just 5 days’ notice. He will face a tough test against the seasoned Sam Alvey, who boasts 22 fights in the UFC.

There’s little doubt that Sam Alvey is fighting for his future in the organization, losing 6 of his last 7 UFC fights.

Allen was on the wrong end of a big upset in his last fight and needs a win to get back on track. This fight will be the first step on his journey to break into the rankings.

Sam Alvey isn’t too bothered by the change in opponent and is ready for anyone. His prediction is for an exciting fight no matter who they put him against:

“I’d fight Ngannou if they needed me to.”

Brendan Allen is keen to get back in the win column after his disappointing defeat to Chris Curtis:

“I’m coming to get the bad taste out of my mouth from the last outing.”

Get your Sam Alvey vs Brendan Allen picks in.

Where to bet on Sam Alvey vs Brendan Allen

Sam Alvey vs Brendan Allen tale of the tape

Brendan “All In” Allen fighter profile and recent form 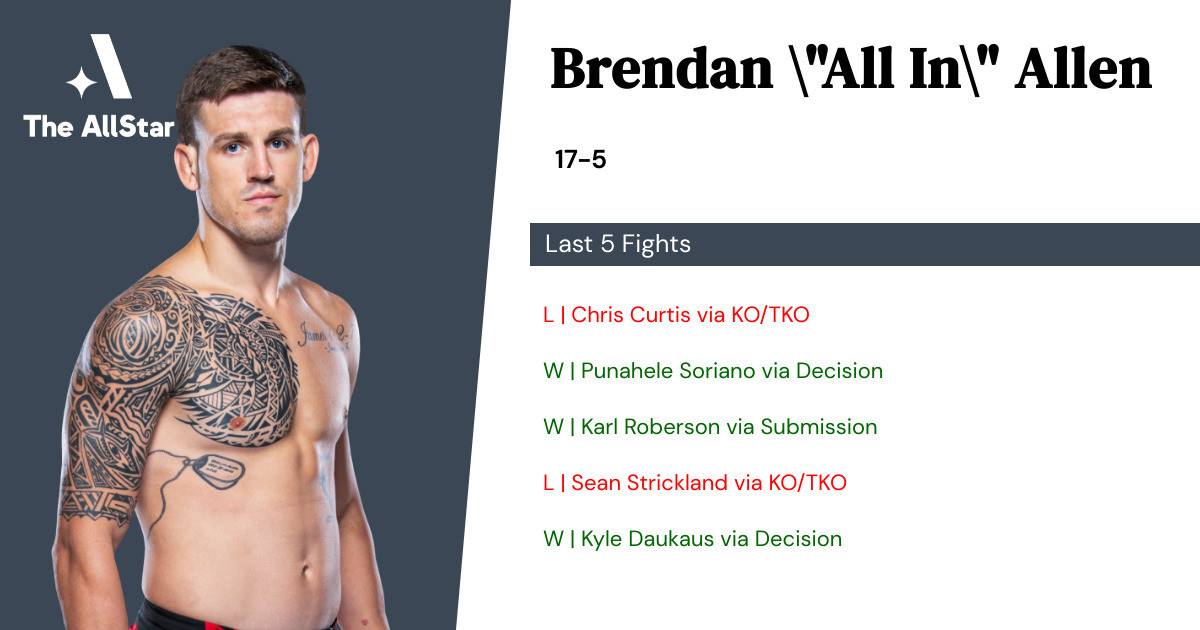 Brendan Allen has a 83% finish rate, including 5 by knockout, 9 by submission, 3 by decision.

Brendan Allen is looking to get back to winning ways after a loss at the hands of Gabriel Checco at UFC Fight Pass Invitational. 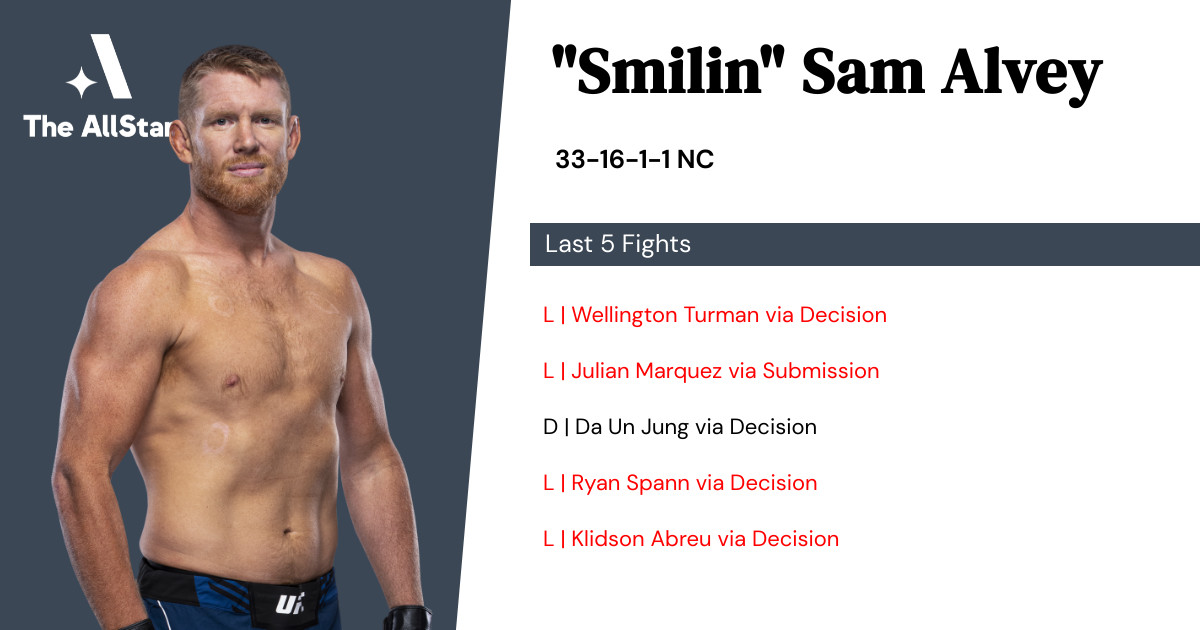 Sam Alvey is currently on a 2 fight losing skid.

Sam Alvey vs Brendan Allen is set to go down at UFC Vegas 47 – Hermansson vs. Strickland. The fight is expected to start at around 7:30pm EST on Saturday 5th February 2022.

ESPN+ is the best option to live stream Sam Alvey vs Brendan Allen if you live in the United States. Outside of the USA, the best option is to register for UFC Fight Pass.

Where can I get the best odds for the Sam Alvey vs Brendan Allen UFC fight?

Use the AllStar’s directory to find the best sportsbooks and recommendations on where to place UFC bets online. If you just want to play for fun, head over to to our Fantasy UFC picks app to make your fight predictions for Sam Alvey vs Brendan Allen totally FREE.