Joshua Culibao earned his first victory in the UFC with a unanimous decision win over Shayilan Nuerdanbieke last May.

Seung Woo Choi vs Joshua Culibao will take place on the prelims at UFC 275: Teixeira vs. Procházka.

Seung Woo Choi lost his first fight since 2019 after being submitted by Alex Caceres last October. The Korean was the sizeable betting favorite (-275) going into the fight.

Choi got his UFC career off to a disappointing start with two consecutive losses before stringing together a run of three victories. He is now 3-3 in the promotion.

Joshua Culibao racked up his first UFC victory at the third attempt with a dominant performance against Shayilan Nuerdanbieke.

Culibao suffered a second-round stoppage defeat on his UFC debut against Jalin Turner before a back-and-forth draw against Charles Jourdain.

Seung Woo Choi is considerably taller than his opponent at 6”0 compared to Culibao who is 5”9.

The stats reveal that both fighters prefer a stand-up fight and seldom shoot for takedowns.

Choi has 6 fights in the UFC, while Culibao has fought 3 times in the promotion.

This is a fascinating matchup between two young and talented fighters in the UFC Featherweight Division.

These two fighters are likely to keep this one on the fight, so expect a technical striking matchup.

Seung Woo Choi was steadily working his way up the 145lbs Division with three wins in a row before his most recent defeat.

Culibao can put together his first win streak in the UFC and make his own statement as the betting underdog here.

The oddsmakers’ predictions have Seung Woo Choi as the betting favorite with opening odds of -240.

Josh Culibao spoke exclusively with The AllStar and made his predictions:

Chatted with Josh Culibao for @TheAllStarSport ahead of his fight at #UFC275 against Seung Woo Choi on June 11 in Singapore.

Culibao feels Choi's aggression will backfire, expects to do a lot of damage

Get your Seung Woo Choi vs Joshua Culibao picks in.

Seung Woo Choi vs Joshua Culibao tale of the tape 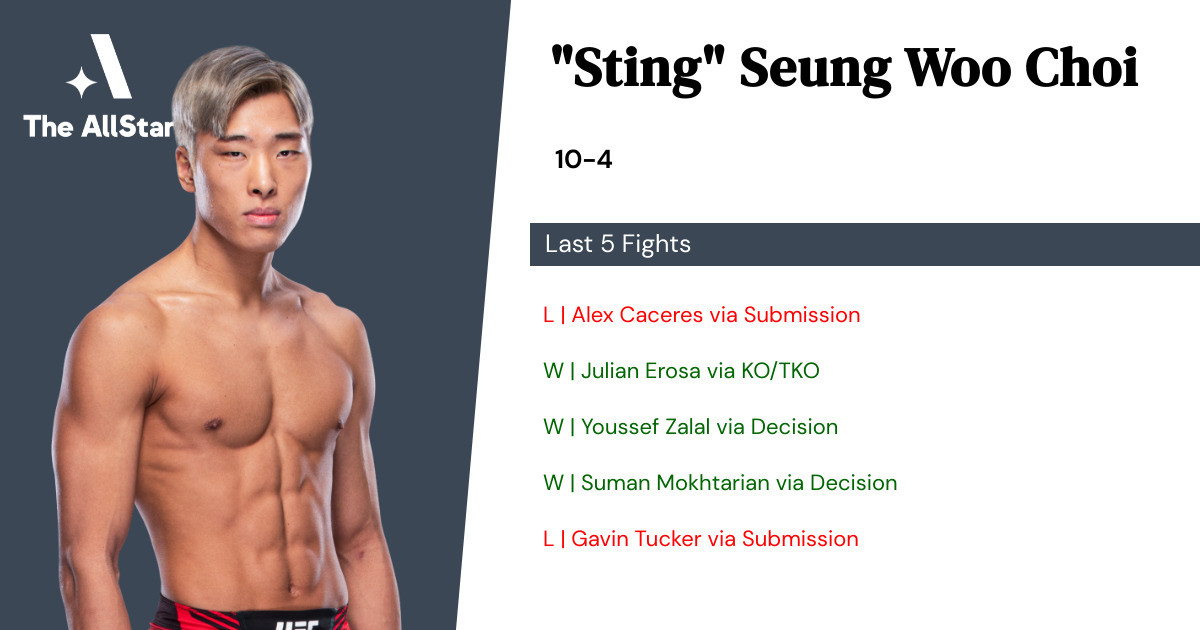 Seung Woo Choi has a 60% finish rate, including 6 by knockout, 4 by decision.

Seung Woo Choi is looking to get back to winning ways after a loss at the hands of Alex Caceres at UFC Fight Night: Costa vs. Vettori. 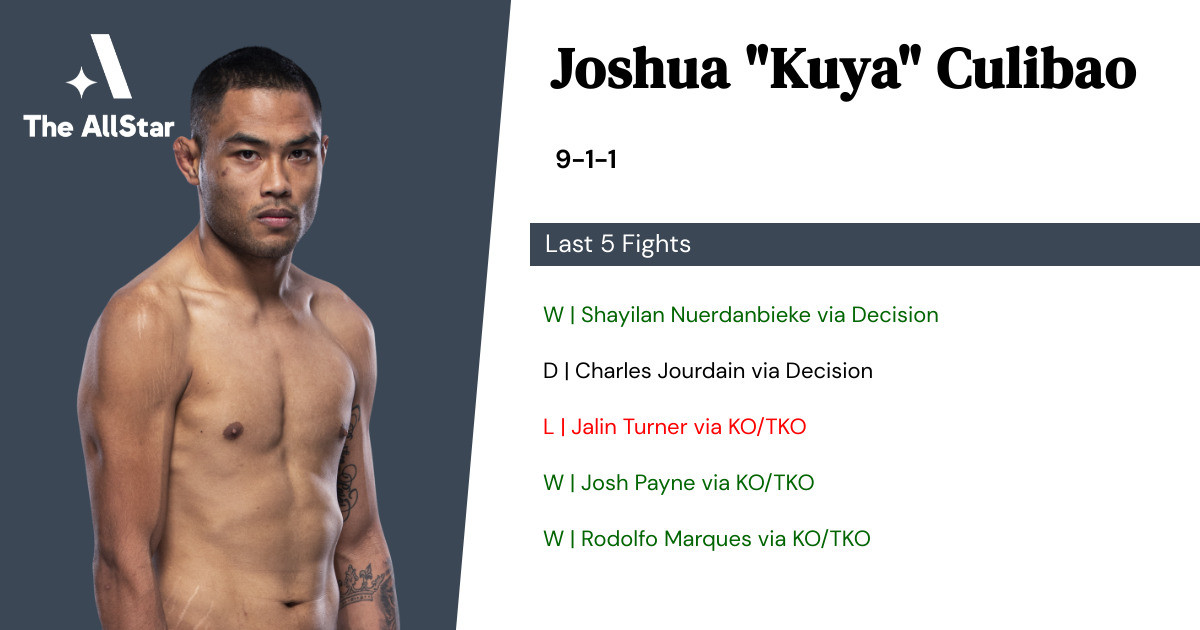 Joshua Culibao has a 56% finish rate, including 5 by knockout, 4 by decision.

Joshua Culibao is looking to put together a winning streak, having last beaten Shayilan Nuerdanbieke at UFC Fight Night: Font vs. Garbrandt.

Seung Woo Choi vs Joshua Culibao is set to go down at UFC 275 – Teixeira vs. Procházka. The fight is expected to start at around 6:00pm EST on Saturday 11th June 2022.

ESPN+ is the best option to live stream Seung Woo Choi vs Joshua Culibao if you live in the United States. Outside of the USA, the best option is to register for UFC Fight Pass.

Where can I get the best odds for the Seung Woo Choi vs Joshua Culibao UFC fight?

Use the AllStar’s directory to find the best sportsbooks and recommendations on where to place UFC bets online. If you just want to play for fun, head over to to our Fantasy UFC picks app to make your fight predictions for Seung Woo Choi vs Joshua Culibao totally FREE.