Shane Burgos vs Charles Jourdain is set to go down at UFC Fight Night: Ortega vs. Rodriguez at 2:00pm EST on Saturday 16th July 2022 in a 145lbs matchup.

Shane Burgos returned to the win column with a unanimous decision victory over Billy Quarantillo at UFC 268.

Charles Jourdain made it two wins in a row following a first-round submission win over Lando Vannata in April.

Premature announced by many. But here is the correct date.

This 145lbs fight will be on the main card at UFC Fight Night: Ortega vs. Rodriguez.

Shane Burgos put on another barnburner when he faced Billy Quarantillo in November, winning the fight by unanimous decision.

Burgos had lost two in a row following defeats to Josh Emmett and Edson Barboza. “Hurricane” Shane is now 7-3 in the UFC.

Charles Jourdain followed up a dominant performance against Andre Ewell with a quick submission finish against Lando Vannata in April.

Jourdain has won three of his last four UFC fights, including a knockout win against Marcelo Rojo in March 2021.

Shane Burgos will be the taller fighter in this matchup at 5”11 compared to Jourdain who is 5”9. Burgos will also have a huge 6-inch reach advantage.

The stats show that Burgos lands at a massive 7.95 significant strikes per minute to Jourdain’s 5.60. Neither of these fighters tend to shoot for takedowns.

Shane Burgos and Charles Jourdain are two of the most exciting and talented strikers in the entire UFC.

This matchup is already being heralded as the people’s main event. Expect a brawl on the feet and a high chance of a performance bonus.

Charles Jourdain could finally break into the Top 15 Featherweight rankings if he can overcome this difficult test.

AIR JOURDAIN GETS IT DONE ON THE GROUND 🤯

He will face an extremely dangerous brawler in Shane Burgos who is also looking to climb up the division.

The oddsmakers’ predictions have Shane Burgos as the betting favorite with openings odds of -185.

Get your Shane Burgos vs Charles Jourdain picks in.

Shane Burgos vs Charles Jourdain tale of the tape 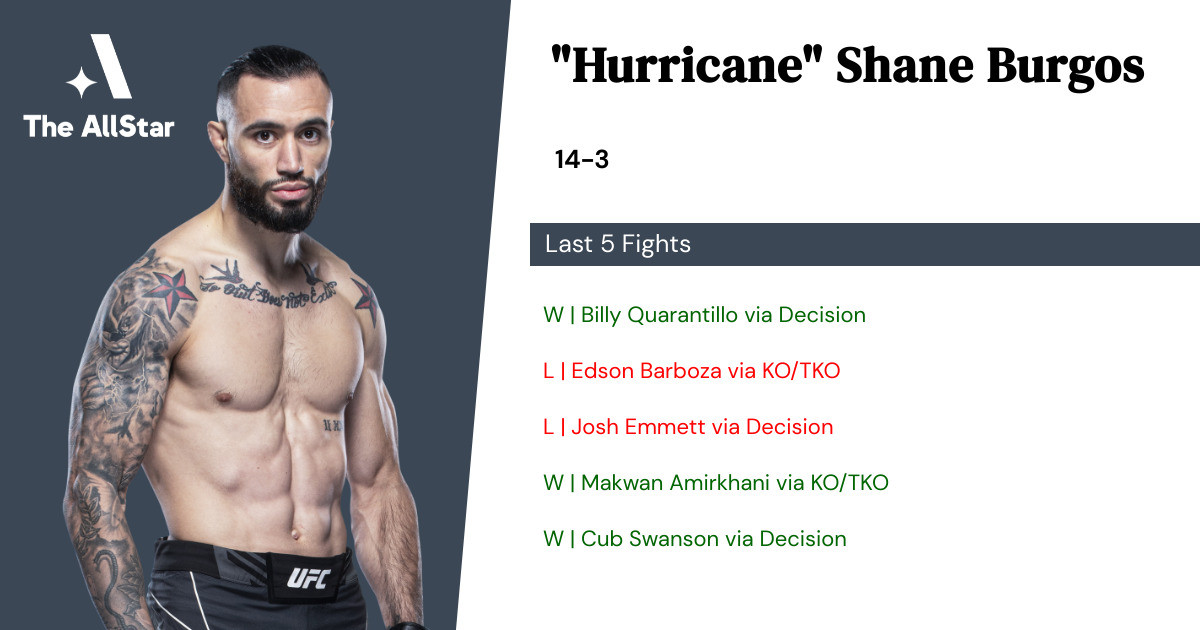 Shane Burgos has a 72% finish rate, including 5 by knockout, 5 by submission, 4 by decision.

Shane Burgos is looking to put together a winning streak, having last beaten Billy Quarantillo at UFC 268: Usman vs. Covington 2. 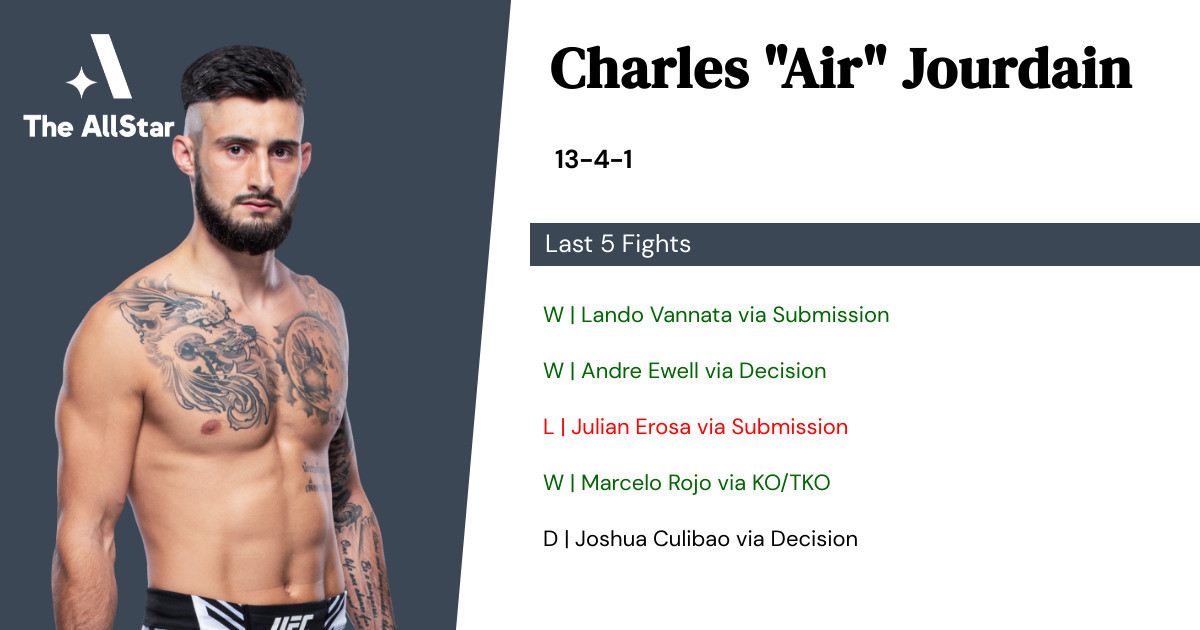 Charles Jourdain has a 93% finish rate, including 8 by knockout, 4 by submission, 1 by decision.

Shane Burgos vs Charles Jourdain is set to go down at UFC Fight Night – Ortega vs. Rodriguez. The fight is expected to start at around 2:00pm EST on Saturday 16th July 2022.

ESPN+ is the best option to live stream Shane Burgos vs Charles Jourdain if you live in the United States. Outside of the USA, the best option is to register for UFC Fight Pass.

Where can I get the best odds for the Shane Burgos vs Charles Jourdain UFC fight?

Use the AllStar’s directory to find the best sportsbooks and recommendations on where to place UFC bets online. If you just want to play for fun, head over to to our Fantasy UFC picks app to make your fight predictions for Shane Burgos vs Charles Jourdain totally FREE.