Thiago Moises vs Christos Giagos is set to go down at UFC Fight Night: Tsarukyan vs. Gamrot at 7:00pm EST on Saturday 25th June 2022 in a 155lbs matchup.

Thiago Moises is on a two-fight losing streak after a first-round TKO defeat to Joel Alvarez in November.

Christos Giagos is also coming off a defeat after he was stopped by Arman Tsarukyan last September.

Thiago Moises will be the betting favorite with opening odds of -235.

Christos Giagos is the betting underdog with opening odds of +205.

This 155lbs scrap will take place on the main card at UFC Fight Night: Tsarukyan vs. Gamrot.

The output in this one 🤯

Neither lightweight will give an inch as we close RD 3. #UFCVegas20 pic.twitter.com/EsUHsMS1id

The Brazilian had been on a three-fight win streak with victories over Michael Johnson, Bobby Green and Alexander Hernandez. He is now 4-4 in the UFC.

BAD place to find yourself in if you're facing @CGiagos! 😰 #UFCVegas17 pic.twitter.com/8AydXPvrpj

Giagos has won four of his last six UFC fights, including a submission win over Sean Soriano last May.

Christos Giagos will be the taller man in this matchup at 5”10, while Moises is 5”8. The American will have a slight 1-inch reach advantage.

Thiago Moises is 27 years old with a total of 21 pro fights, compared to the 32-year-old Giagos who has fought 28 times.

The stats reveal that Christos Giagos frequently integrates grappling into his fights with an average of 3.31 TDs per 15 minutes.

This will be an exciting matchup between two tough Lightweights with a lot to prove.

Thiago Moises is a well-rounded fighter with a nasty submission game. His opponent is also no stranger to submissions and tends to shoot for takedowns, so this will be an intriguing fight.

Both fighters are coming off of losses, so there is a lot at stake in this fight.

Moises showed great promise with big wins over the likes of Michael Johnson and Alexander Hernandez before his current two-fight skid.

Giagos has also faced tough opposition in the form of Arman Tsarukyan.

The oddsmakers’ predictions have Thiago Moises as the sizable betting favorite with opening odds of -235.

Get your Thiago Moises vs Christos Giagos picks in.

Thiago Moises vs Christos Giagos tale of the tape 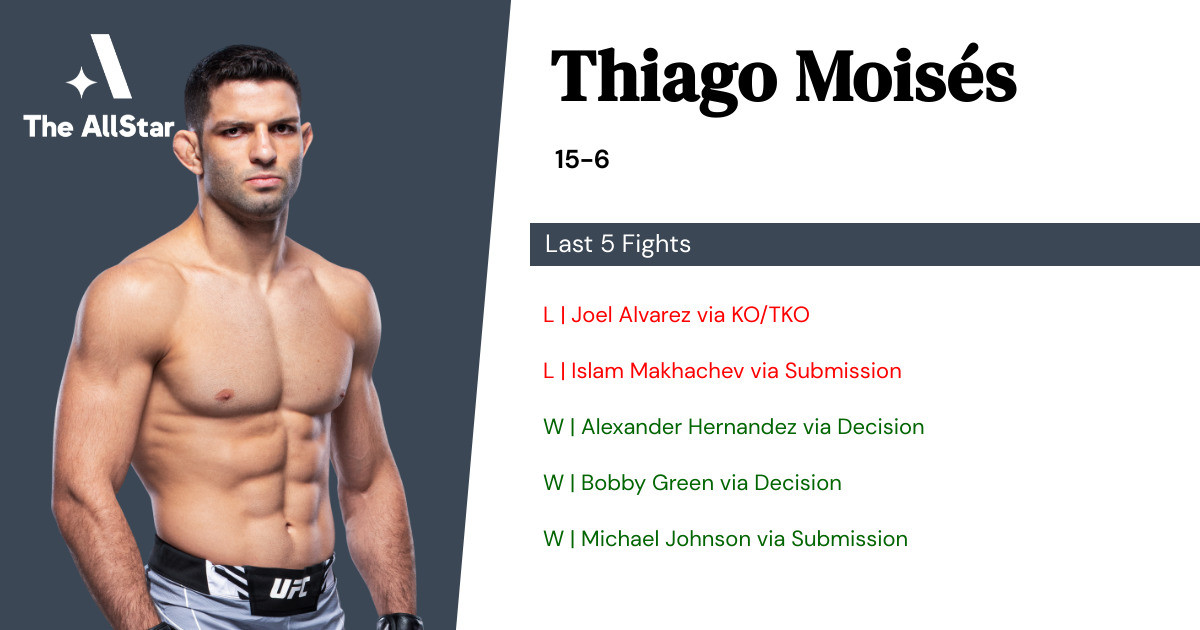 Thiago Moisés has a 60% finish rate, including 3 by knockout, 6 by submission, 6 by decision.

Thiago Moisés is currently on a 2 fight losing skid. 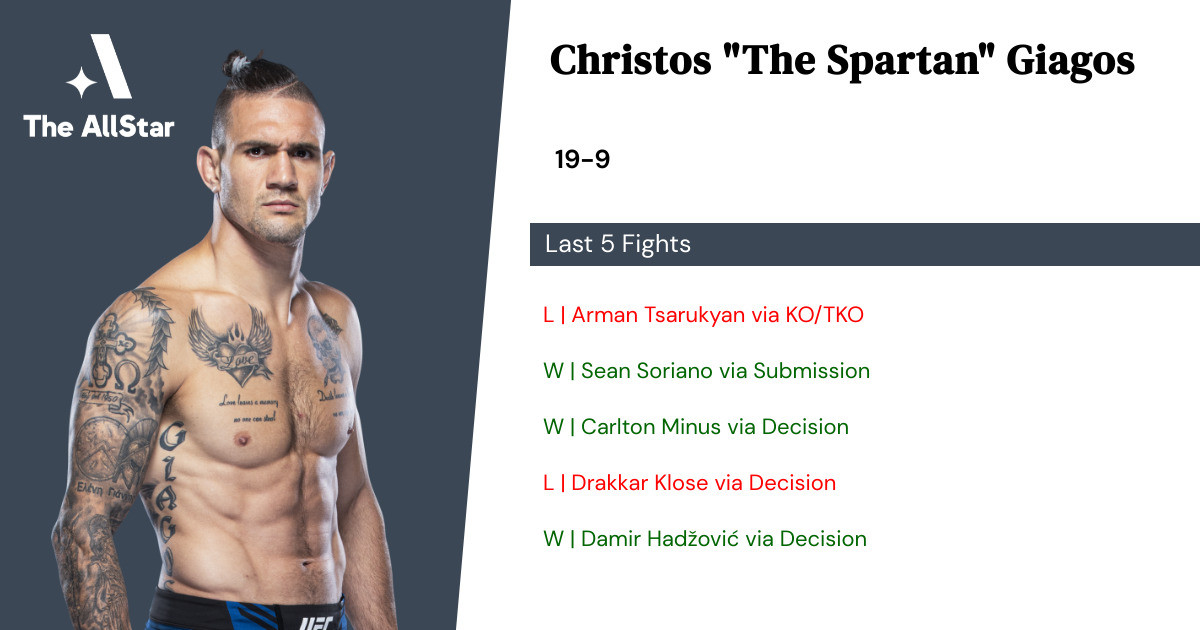 Christos Giagos has a 58% finish rate, including 7 by knockout, 4 by submission, 8 by decision.

Christos Giagos is looking to get back to winning ways after a loss at the hands of Arman Tsarukyan at UFC Fight Night: Smith vs. Spann.

Thiago Moises vs Christos Giagos is set to go down at UFC Fight Night – Tsarukyan vs. Gamrot. The fight is expected to start at around 7:00pm EST on Saturday 25th June 2022.

ESPN+ is the best option to live stream Thiago Moises vs Christos Giagos if you live in the United States. Outside of the USA, the best option is to register for UFC Fight Pass.

Where can I get the best odds for the Thiago Moises vs Christos Giagos UFC fight?

Use the AllStar’s directory to find the best sportsbooks and recommendations on where to place UFC bets online. If you just want to play for fun, head over to to our Fantasy UFC picks app to make your fight predictions for Thiago Moises vs Christos Giagos totally FREE.