Tim Elliott is looking to bounce back from a unanimous decision defeat to Matheus Nicolau in October.

Tagir Ulanbekov has won five-in-a-row including two wins in the UFC. He is coming off a split-decision victory over Allan Nascimento.

Tagir Ulanbekov opens as the favorite with betting odds of -240.

Tim Elliott will be the betting underdog with opening odds of +210.

Our man @TElliott125 is ready to touch down again in the @ufc's Octagon & make more waves on March 5 ✍🏾 #TheDarkside pic.twitter.com/L0R9xv98zk

This fight will be contested at Flyweight on the prelims of UFC 272.

UFC veteran Tim Elliott was on a two-fight winning streak before his recent defeat to Matheus Nicolau.

Wouldn't give an inch…@TElliott125 shuts out Espinosa on the scorecards 📝 #UFC259 pic.twitter.com/1ydIwVPnco

Elliott is 4-6 in the UFC after suffering three defeats in less than 8 months in 2019 and 2020, including losses to champion Deiveson Figueiredo and Brandon Royval.

Tagir Ulanbekov edged past Allan Nascimento in his last UFC appearance with a split decision win. Despite the split scorecards, 16 out of 17 major media outlets had Ulanbekov winning the fight.

🇷🇺 Tagir Ulanbekov gets it done in his debut.

Ulanbekov is a former training partner of Khabib Nurmagomedov and has lost just once in his career. He beat Bruno Silva on his UFC debut in October 2020.

Both fighters are 5”6 tall, but Tagir Ulanbekov will have a significant 3-inch reach advantage in the fight.

Tim Elliott is the older fighter at 35, while Ulanbekov is 30 years old.

Elliott is far more experienced with 34 pro fights to Ulanbekov’s 14.

This fight promises to be a scrap from the opening bell. Tim Elliott is a game fighter with a full-throttle style from start to finish.

Tagir Ulanbekov is considered one of the brighter prospects in the Flyweight Division. How he handles a tough veteran like Elliott will show whether the hype is real.

Both of these fighters are ranked in the Top 15 and looking to climb up the roster. A win for either man would almost certainly bring a Top 10 opponent next.

The oddsmakers’ predictions see Tagir Ulanbekov as the favorite with opening betting odds of -240.

Get your Tim Elliott vs Tagir Ulanbekov picks in.

Where to bet on Tim Elliott vs Tagir Ulanbekov

Tim Elliott vs Tagir Ulanbekov tale of the tape 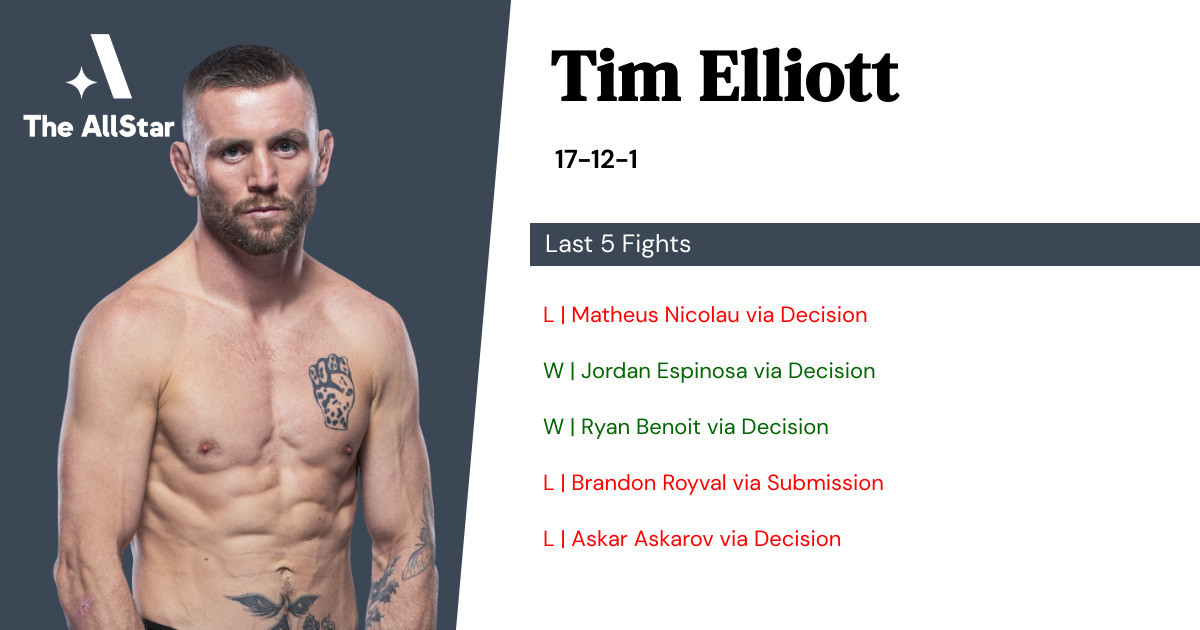 Tim Elliott has a 42% finish rate, including 3 by knockout, 8 by submission, 10 by decision.

Tim Elliott is looking to get back to winning ways after a loss at the hands of Matheus Nicolau at UFC Fight Night: Dern vs. Rodriguez. 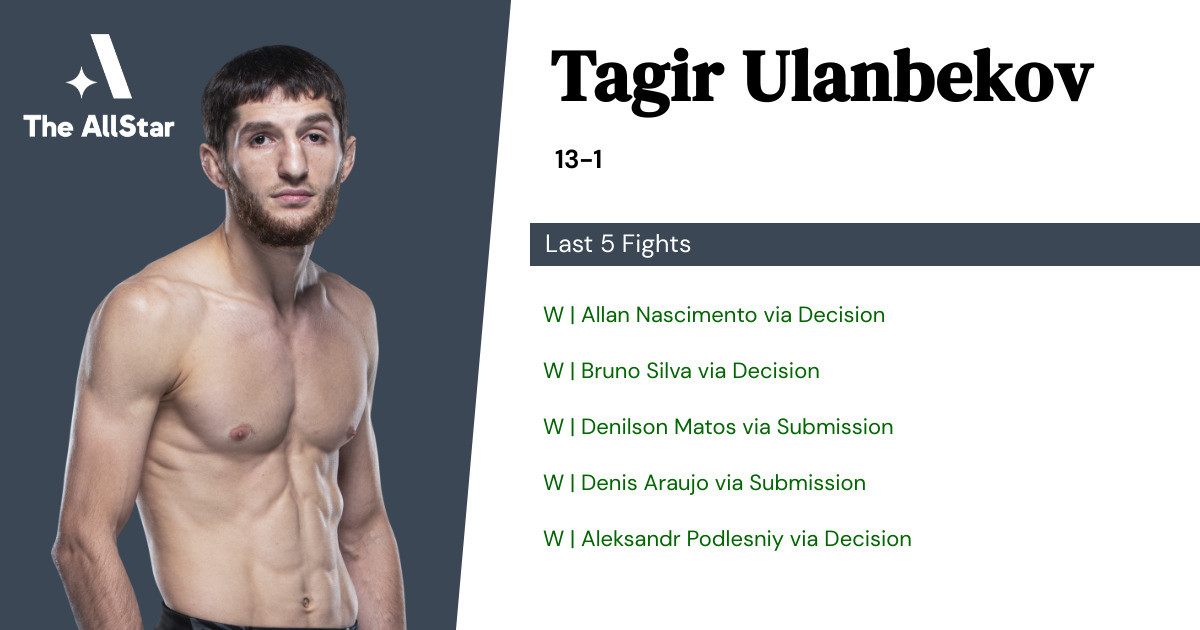 Tagir Ulanbekov has a 54% finish rate, including 7 by submission, 6 by decision.

ESPN+ is the best option to live stream Tim Elliott vs Tagir Ulanbekov if you live in the United States. Outside of the USA, the best option is to register for UFC Fight Pass.

Where can I get the best odds for the Tim Elliott vs Tagir Ulanbekov UFC fight?