Tracy Cortez is riding an impressive three-fight win streak since making her UFC debut in 2019.

Melissa Gatto has earned two consecutive stoppage finishes in the UFC since her debut just over six months ago.

Tracy Cortez will be the betting favorite with opening odds of -175.

Melissa Gatto is the betting underdog with opening odds of +155.

This Flyweight scrap will take place on the prelims of UFC 274.

Tracy Cortez earned a split decision victory against Justine Kish in her last Octagon appearance. She weighed in at half a pound over the 126lbs limit.

Heavy exchanges coming from @TracyCortezMMA and @JustineKish in RD 2️⃣!

Cortez has shone brightly since earning her UFC contract on Dana White’s Contender Series in 2019 with a win over current-UFC prospect Mariya Agapova.

Melissa Gatto continued her explosive start in the UFC with a body-kick stoppage win against seasoned veteran Sijara Eubanks in December.

Gatto made her long-awaited UFC debut in August 2021 after two years of trying. She broke her opponent Victoria Leonardo’s arm to get the stoppage win on her debut.

While both women stand 5”5 tall, Melissa Gatto will have a 3-inch reach advantage.

Both fighters have the same number of pro-MMA bouts at 10. Cortez has one loss on her record, while Gatto is undefeated.

The stats show that Cortez is much more likely to attempt a takedown with an average of 3.00 TDs per 15 minutes to Gatto’s 0.72.

This UFC Women’s Flyweight matchup pits two of the division’s most exciting prospects against one another.

No doubting the toughness of @VLeo0216.

Doctor stops this one after round 2️⃣. #UFC256 pic.twitter.com/dkZGabeKjL

Both women are riding win streaks and are still very much at the beginning of their careers.

Victory for either fighter would probably see them break into the Top 15 rankings of the 125lbs division.

Make that 3️⃣-0️⃣in the UFC!@TracyCortezMMA is a flyweight to keep on your radar 👀 #UFCVegas24 pic.twitter.com/qahjLCfGKx

The oddsmakers’ predictions have Tracy Cortez as the favorite with opening betting odds of -175.

Get your Tracy Cortez vs Melissa Gatto picks in.

Tracy Cortez vs Melissa Gatto tale of the tape 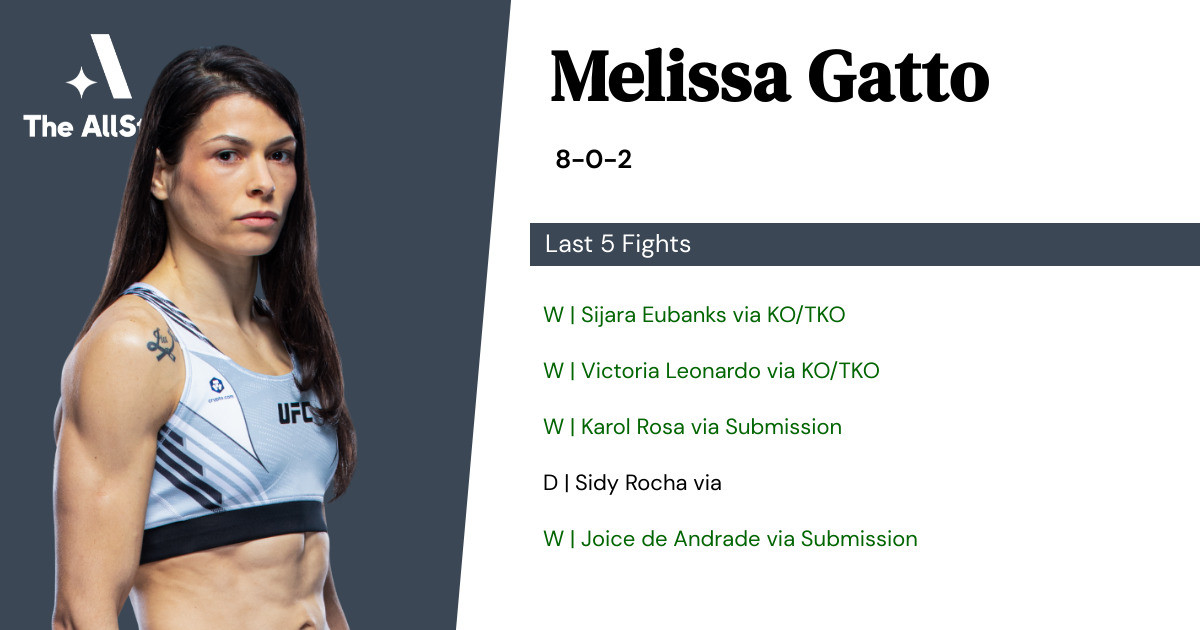 Melissa Gatto has a 75% finish rate, including 2 by knockout, 4 by submission, 2 by decision. 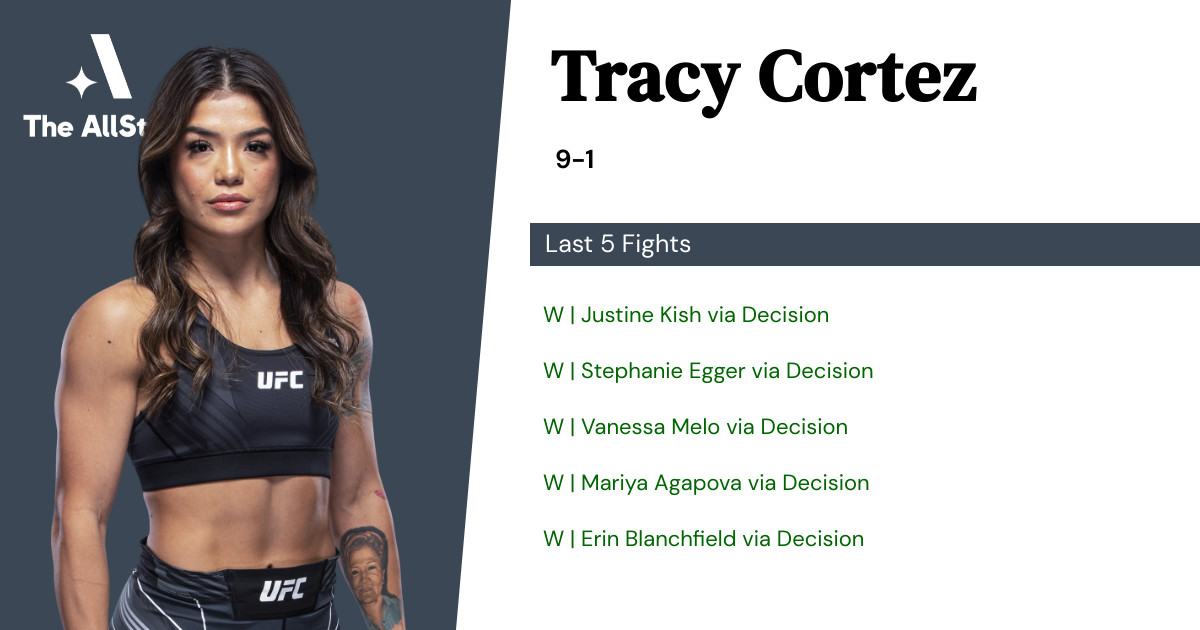 Tracy Cortez has a 23% finish rate, including 1 by knockout, 1 by submission, 7 by decision.

Tracy Cortez vs Melissa Gatto is set to go down at UFC 274 – Oliveira vs. Gaethje. The fight is expected to start at around 5:00pm EST on Saturday 7th May 2022.

ESPN+ is the best option to live stream Tracy Cortez vs Melissa Gatto if you live in the United States. Outside of the USA, the best option is to register for UFC Fight Pass.

Where can I get the best odds for the Tracy Cortez vs Melissa Gatto UFC fight?

Use the AllStar’s directory to find the best sportsbooks and recommendations on where to place UFC bets online. If you just want to play for fun, head over to to our Fantasy UFC picks app to make your fight predictions for Tracy Cortez vs Melissa Gatto totally FREE.