Virna Jandiroba vs Angela Hill is set to go down at UFC Fight Night: Błachowicz vs. Rakić at 6:30pm EST on Saturday 14th May 2022 in a 115lbs matchup.

Angela Hill also enters this fight on the back of a defeat after a split decision loss to Amanda Lemos in December.

Virna Jandiroba will be the betting favorite with opening odds of -175.

Angela Hill is the betting underdog with opening odds of +155.

This Strawweight matchup is expected on the prelims at UFC Fight Night: Błachowicz vs. Rakić.

Virna Jandiroba suffered her third UFC loss in October with a decisive defeat to Amanda Ribas. The Brazilian entered this bout on the back of a stoppage win over Kanako Murata.

That was beautiful BJJ 😍

Virna Jandiroba gets it done in the first round and now has 13 career submissions! 👏 #UFC252 pic.twitter.com/7u8OZhyJzn

Jandiroba has earned finishes in all three of her UFC victories. She is now 3-3 in the promotion following defeats against top-level opposition in Carla Esparza and Mackenzie Dern.

Angela Hill has now lost four of her last five UFC fights after a narrow defeat to Amanda Lemos. Her only win since 2020 has come against Ashley Yoder by decision.

Hill went on a UFC-best three-fight winning streak in 2019 with wins over Ariane Carnelossi, Hannah Cifers and Loma Lookboonmee.

Both of these women stand 5”3 tall and will also have a similar reach in this matchup.

The stats show a significant difference in the fighting styles of each woman. Virna Jandiroba completes an average of 2.14 TDs per 15 minutes, while Angela Hill lands almost double the significant strikes at 5.56 per minute.

This Strawweight fight matches up two of the toughest fighters in the division.

Don’t let Hill’s current streak fool you – she has dropped split decisions to some of the best in the division and can beat any opponent in front of her.

Virna Jandiroba has three stoppages in the UFC and always comes to fight. Expect a bruising war in this prelim matchup.

The stakes are high for both fighters entering this matchup following a defeat.

Jandiroba has alternated wins and losses since 2020 and needs a win to start working her way up the UFC rankings.

Angela Hill is still in the Top 15 but won’t be for long if she suffers another defeat.

The oddsmakers’ predictions have Virna Jandiroba as the betting favorite with opening odds of -175.

Get your Virna Jandiroba vs Angela Hill picks in.

Virna Jandiroba vs Angela Hill tale of the tape 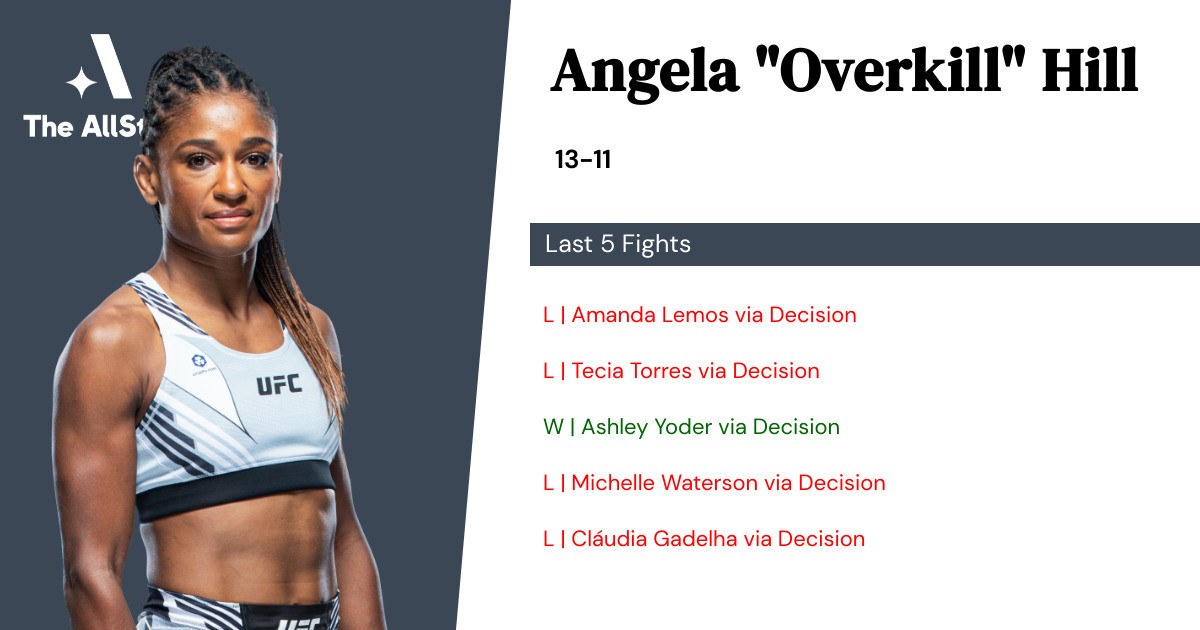 Angela Hill has a 39% finish rate, including 5 by knockout, 8 by decision.

Angela Hill is currently on a 2 fight losing skid. 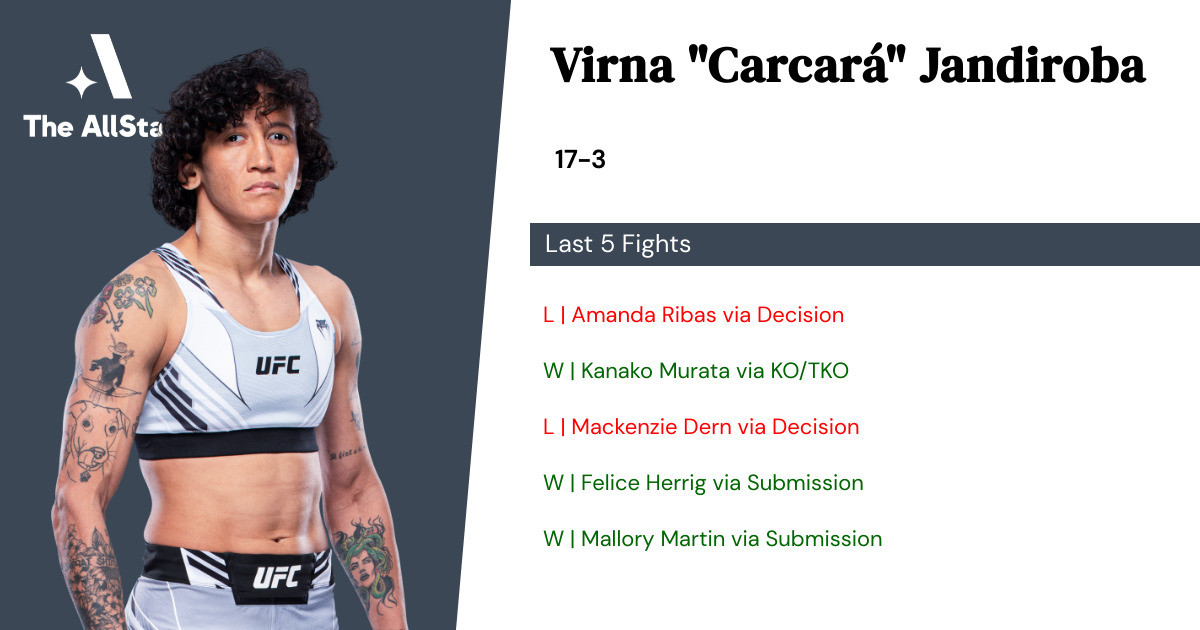 Virna Jandiroba has a 83% finish rate, including 1 by knockout, 13 by submission, 3 by decision.

Virna Jandiroba is looking to get back to winning ways after a loss at the hands of Amanda Ribas at UFC 267: Błachowicz vs. Teixeira.

Virna Jandiroba vs Angela Hill is set to go down at UFC Fight Night – Błachowicz vs. Rakić. The fight is expected to start at around 6:30pm EST on Saturday 14th May 2022.

ESPN+ is the best option to live stream Virna Jandiroba vs Angela Hill if you live in the United States. Outside of the USA, the best option is to register for UFC Fight Pass.

Where can I get the best odds for the Virna Jandiroba vs Angela Hill UFC fight?

Use the AllStar’s directory to find the best sportsbooks and recommendations on where to place UFC bets online. If you just want to play for fun, head over to to our Fantasy UFC picks app to make your fight predictions for Virna Jandiroba vs Angela Hill totally FREE.