Viviane Araujo vs Andrea Lee is set to go down at UFC Fight Night: Błachowicz vs. Rakić at 8:00pm EST on Saturday 14th May 2022 in a 125lbs matchup.

Viviane Araujo suffered a defeat to top Flyweight contender Katlyn Chookagian in her last UFC appearance in May.

Andrea Lee is now on a two-fight winning streak after successive stoppage victories over Antonina Shevchenko and Cynthia Calvillo.

The betting odds in this fight are extremely close.

Andrea Lee will be the small betting favorite with opening odds of -110.

Viviane Araujo is the betting underdog with opening odds of -105.

This fight is expected to be the featured prelim at UFC Fight Night: Błachowicz vs. Rakić.

The right hand of @viviaraujomma is vicious 😳

Andrea Lee has turned things around with two wins on the trot. She secured a submission victory over Antonina Shevchenko at UFC 262 before a corner stoppage win against Cynthia Calvillo in November.

What a submission by @AndreaKGBLee 💪

Up until this point, Lee was on a three-fight skid following a promising beginning to her UFC career. She is now 5-3 in the promotion.

Andrea Lee will be the taller woman in this matchup at 5”6 compared to Viviane Araujo who is 5”4. Lee will have a small 1-inch reach advantage.

Despite being the younger fighter at 33, Andrea Lee has more pro fights on her record with 18. Araujo has fought 13 times and is 35 years old.

The stats reveal that both women mix in the grappling often. Viviane Araujo has landed an average of 2.10 TDs per 15 minutes to Lee’s 1.77.

Araujo’s TD defense is an impressive 94%, while Lee has defended 58% of TD attempts.

This is an excellent matchup between two fighters who look set for bigger and better things in the UFC Flyweight Division.

Both women are exceptional in the grappling department, so this fight could play out on the mat.

This fight matches up #8 and #9 in the UFC Flyweight Division. The winner will put themselves into the mix for a Top 5 fight. A couple of wins on the trot could even warrant a title shot for either woman.

The oddsmakers’ predictions have trouble separating these women. The opening betting odds are extremely close with Andrea Lee as the slight betting favorite at -110.

Get your Viviane Araujo vs Andrea Lee picks in.

Viviane Araujo vs Andrea Lee tale of the tape

Viviane Araujo has the better record against the shared opposition, at 2-0 to Andrea Lee’s record of 1-2 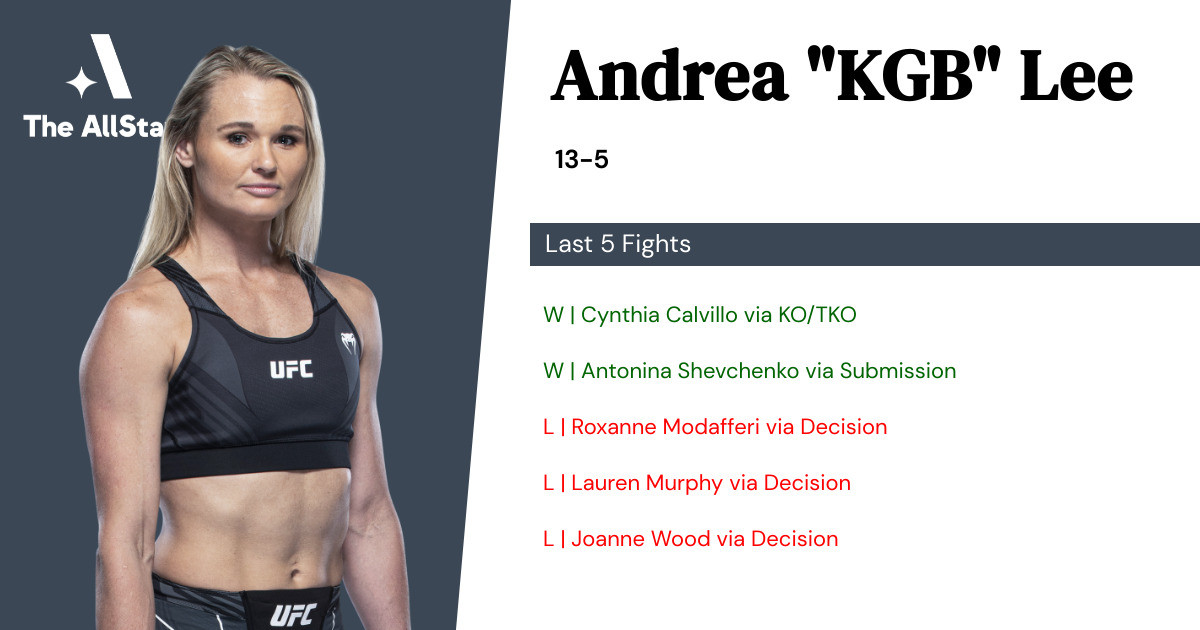 Andrea Lee has a 62% finish rate, including 3 by knockout, 5 by submission, 5 by decision. 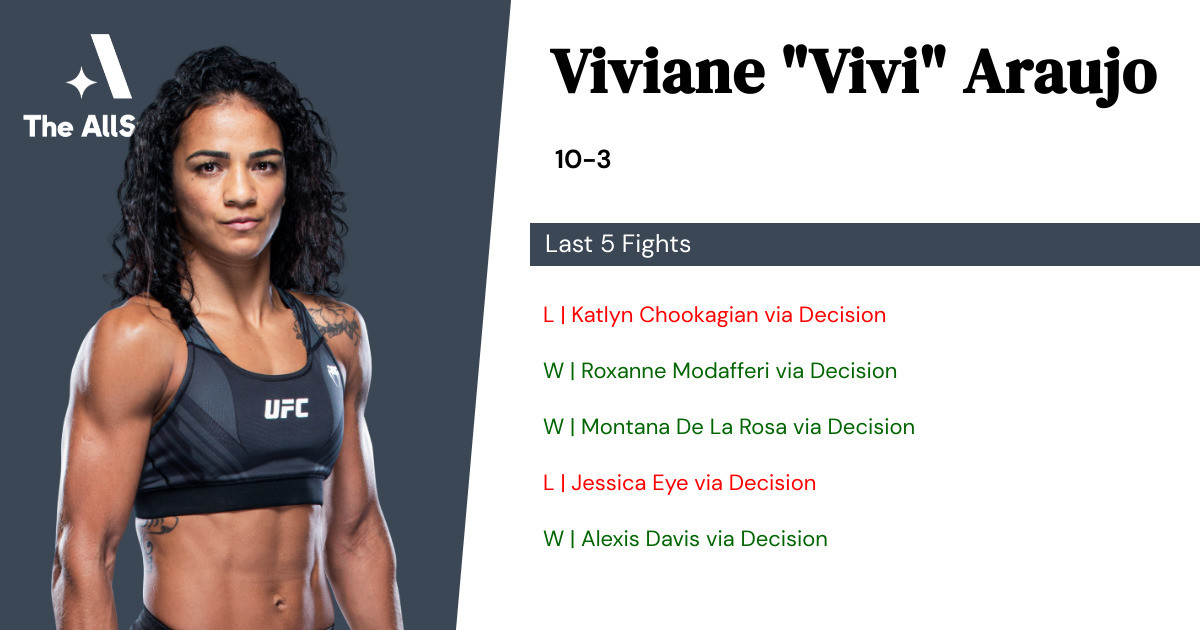 Viviane Araujo has a 70% finish rate, including 3 by knockout, 4 by submission, 3 by decision.

Viviane Araujo is looking to get back to winning ways after a loss at the hands of Katlyn Chookagian at UFC 262: Oliveira vs. Chandler.

Viviane Araujo vs Andrea Lee is set to go down at UFC Fight Night – Błachowicz vs. Rakić. The fight is expected to start at around 8:00pm EST on Saturday 14th May 2022.

ESPN+ is the best option to live stream Viviane Araujo vs Andrea Lee if you live in the United States. Outside of the USA, the best option is to register for UFC Fight Pass.

Where can I get the best odds for the Viviane Araujo vs Andrea Lee UFC fight?

Use the AllStar’s directory to find the best sportsbooks and recommendations on where to place UFC bets online. If you just want to play for fun, head over to to our Fantasy UFC picks app to make your fight predictions for Viviane Araujo vs Andrea Lee totally FREE.