Gabe Green registered his first UFC victory in his last fight with a decision win over Philip Rowe in February 2021.

Gabe Green will be the betting favorite with opening odds of -140.

Yohan Lainesse is the betting underdog with opening odds of +130.

Yohan Lainesse vs Gabe Green was first rumoured in early February before Green confirmed the matchup on his Twitter account.

Since everyone talking about it… and it’s not a secret 😂
here is my next win April 30th 😬 pic.twitter.com/w5iNPuSPbl

This Welterweight bout is expected on the prelims at UFC Fight Night: Font vs. Vera.

Yohan Lainesse took his pro-MMA record to a perfect 8-0 after a stunning first-round knockout against Justin Burlinson in November.

YOHAN LAINESSE KNOCKS HIM OUT COLD!! CANADA WE GOT ANOTHER ONE👊🇨🇦 #DWCS pic.twitter.com/4x4PqzXiwr

The Canadian has won six of his eight pro wins by knockout, with five of them coming in the first round. He will be making his UFC debut in this matchup.

Gabe Green bounced back from a disappointing debut with a resounding victory over Philip Rowe at UFC 258 in February 2021.

Green lost his debut in May 2020 to Daniel Rodriguez, losing on all three judges’ scorecards and every major media outlet pick.

Yohan Lainesse will be the taller fighter in this matchup at 6”1 compared to Gabe Green who is 5”10.

The Canadian will also have a significant 3 inch reach advantage over this fight.

All of Yohan Lainesse’s finishes have come by way of knockout, while Gabe Green has a mix of knockouts and submissions on his record (3 KO’s, 6 submissions).

Yohan Lainesse is the latest exciting Canadian fighter to join the UFC ranks. With an impressive reel of knockouts on his resume, Lainesse is a fighter who can end it all in a flash.

We have a KO of the year candidate!!! #CFFC86 pic.twitter.com/T57Urr3oFP

Gabe Green showed remarkable improvements in his last UFC outing. He is always game for war, so make sure you don’t miss this prelim fight.

Both fighters have a lot to prove in the early stages of their UFC careers.

Yohan Lainesse is making his UFC debut and seeking to build on his fantastic knockout win on the Contender Series.

Gabe Green will be looking to put together the first win streak of his UFC career and also get his first finish in the promotion.

The oddsmakers’ predictions are extremely tight on this matchup. The bookies have made Gabe Green the slight betting favorite with opening odds of -140.

Get your Yohan Lainesse vs Gabe Green picks in.

Yohan Lainesse vs Gabe Green tale of the tape 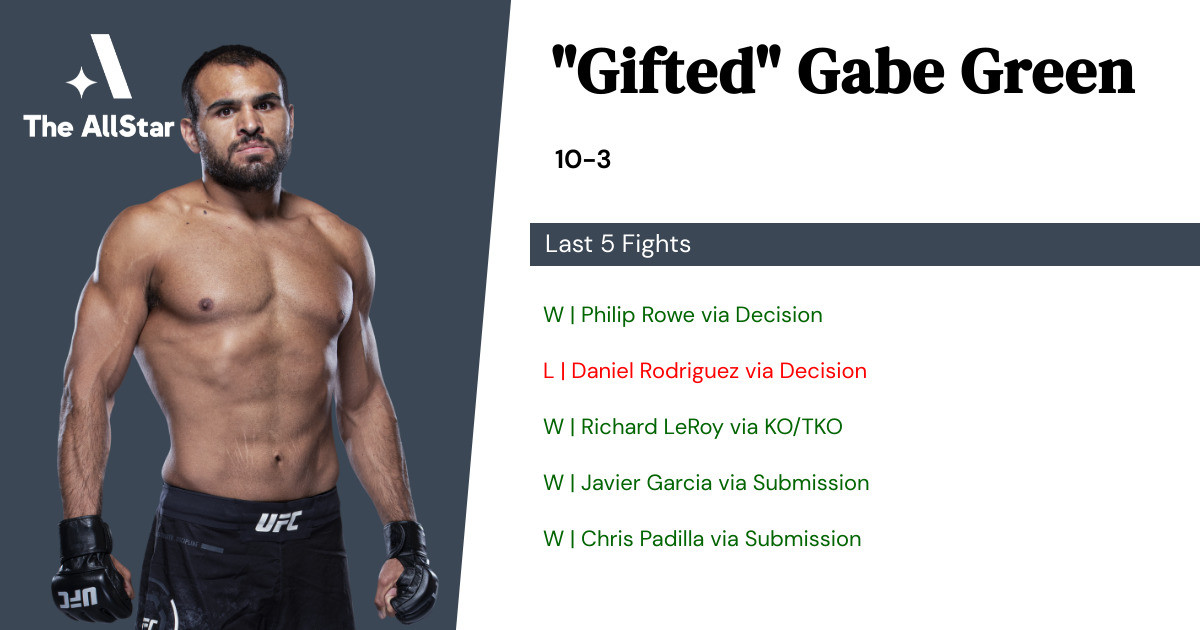 Gabe Green has a 90% finish rate, including 3 by knockout, 6 by submission, 1 by decision.

Gabe Green is looking to put together a winning streak, having last beaten Philip Rowe at UFC 258: Usman vs. Burns.

Yohan Lainesse vs Gabe Green is set to go down at UFC Fight Night – Font vs. Vera. The fight is expected to start at around 6:00pm EST on Saturday 30th April 2022.

ESPN+ is the best option to live stream Yohan Lainesse vs Gabe Green if you live in the United States. Outside of the USA, the best option is to register for UFC Fight Pass.

Where can I get the best odds for the Yohan Lainesse vs Gabe Green UFC fight?

Use the AllStar’s directory to find the best sportsbooks and recommendations on where to place UFC bets online. If you just want to play for fun, head over to to our Fantasy UFC picks app to make your fight predictions for Yohan Lainesse vs Gabe Green totally FREE.