Darren “The Gorilla” Till

Darren “The Gorilla” Till is a 29 year old Male fighter from United Kingdom with a 18-4-1 pro MMA record. Till is scheduled to fight Dricus Du Plessis at UFC 282 on Saturday December 10, 2022 in a Middleweight bout.

Darren Till is currently on a 2 fight losing skid. 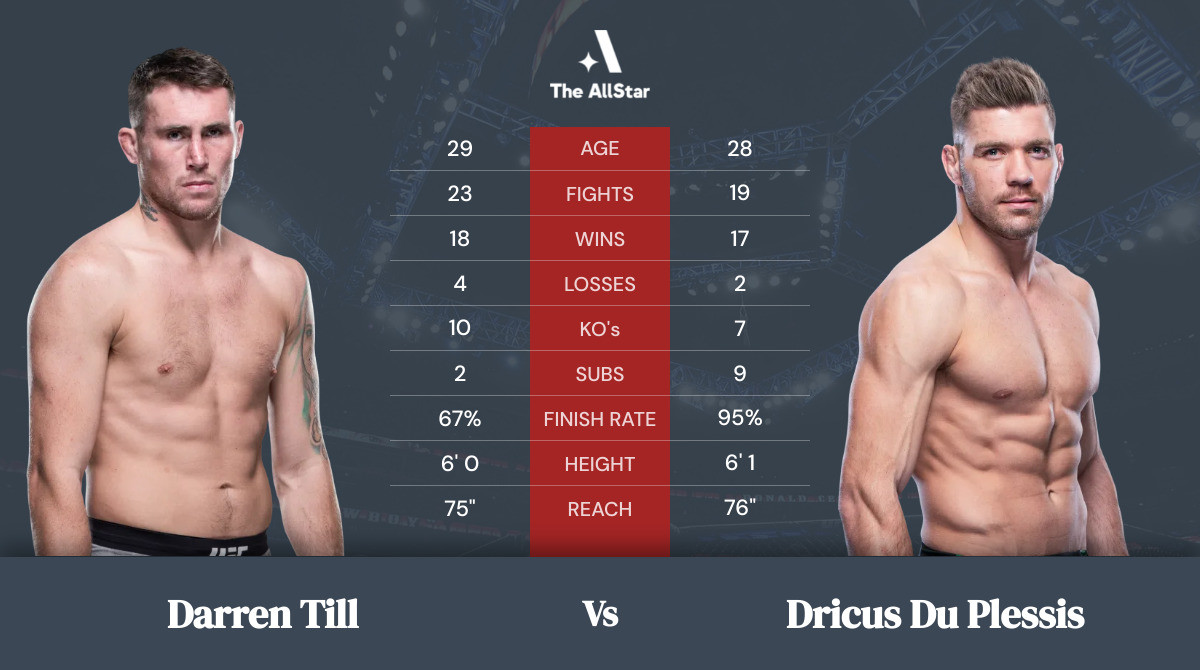 Till made his professional debut against Luciano Oliveira on February 23, 2013, fighting on the regional circuit.

He made a winning start to his career, defeating Luciano Oliveira who carried a 3-5-0 professional MMA record into the fight.

Darren Till beat Luciano Oliveira by Decision at 5:00 of Round 3.

Till made his debut in the UFC against Wendell Oliveira on May 30, 2015, fighting on the main card of UFC Fight Night 67: Condit vs. Alves having compiled a 12-0-0 professional MMA record.

Darren Till beat Wendell Oliveira by KO/TKO at 1:37 of Round 2.

Since his debut, Till has gone on to fight a total of 11 more times in the UFC. His UFC record stands at 6-4-1.

Till lost his 1st welterweight title challenge, losing to Tyron Woodley on September 8, 2018 at UFC 228: Woodley vs. Till.

Darren Till lost to Tyron Woodley by Submission at 4:19 of Round 2.

When was Darren Till's last win?

Who is Darren Till's next opponent?

When was Darren Till's last loss?

Till's last loss came against Derek Brunson at UFC Fight Night on Saturday September 4, 2021. Darren Till lost to Derek Brunson by Submission at 2:13 of Round 3.

How many UFC fights has Darren Till had?

How many pro MMA knockouts does Darren Till have?

Till has knocked out 10 opponents.

How many pro MMA submissions does Darren Till have?

Till has submitted 2 opponents.

How many times has Darren Till been knocked out?

Till has been knocked out 1 times.

How many times has Darren Till been submitted?

Till has been submitted 2 times.

The MMA Daily: Darren Till out of Jack Hermansson fight at UFC London