Nate Diaz is a 37 year old Male fighter from United States with a 20-13-0 pro MMA record. Diaz is scheduled to fight Khamzat Chimaev at UFC 279 on Saturday September 10, 2022 in a Welterweight bout.

Nate Diaz is currently on a 2 fight losing skid. 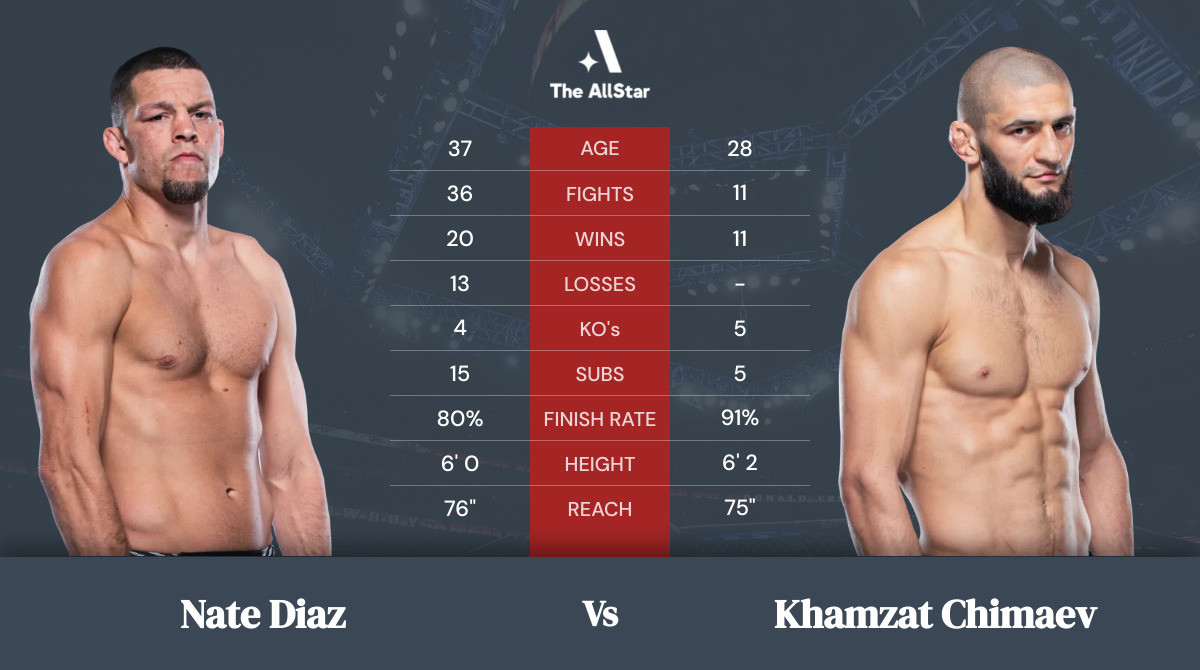 Diaz made his professional debut against Alejandro Garcia on October 21, 2004, fighting on the main card of WEC 12: Halloween Fury 3.

He made a winning start to his career, defeating Alejandro Garcia who carried a 3-1-0 professional MMA record into the fight.

Nate Diaz beat Alejandro Garcia by Submission at 2:17 of Round 3.

Diaz made his debut in the UFC against Manny Gamburyan on June 23, 2007, fighting on the main card of The Ultimate Fighter 5 Finale having compiled a 5-2-0 professional MMA record.

Nate Diaz beat Manny Gamburyan by Submission at 0:20 of Round 2.

Nate Diaz beat Manny Gamburyan by Submission at 0:20 of Round 2.

Diaz lost his 1st lightweight title challenge, losing to Benson Henderson on December 8, 2012 at UFC on FOX 5: Henderson vs. Diaz.

Nate Diaz lost to Benson Henderson by Decision at 5:00 of Round 5.

When was Nate Diaz's last win?

Who is Nate Diaz's next opponent?

Diaz is scheduled to fight Khamzat Chimaev at UFC 279 on Saturday September 10, 2022.

When was Nate Diaz's last loss?

How many UFC fights has Nate Diaz had?

How many pro MMA knockouts does Nate Diaz have?

Diaz has knocked out 4 opponents.

How many pro MMA submissions does Nate Diaz have?

How many times has Nate Diaz been knocked out?

Diaz has been knocked out 2 times.

How many times has Nate Diaz been submitted?

Diaz has been submitted 1 times.

The MMA Daily: Conor McGregor compares Peña vs Nunes rivalry to his own with Nate Diaz

The MMA Daily: Khamzat Chimaev doubts Nate Diaz will show up at UFC 279