Pedro “The Rock” Nobre is a 36 year old Male fighter from Brazil with a 21-6-2 pro MMA record. Nobre is scheduled to fight Yan Teixeira at Strike Grappling Jiu-Jitsu on Sunday November 21, 2021 in a 154 lbs bout. 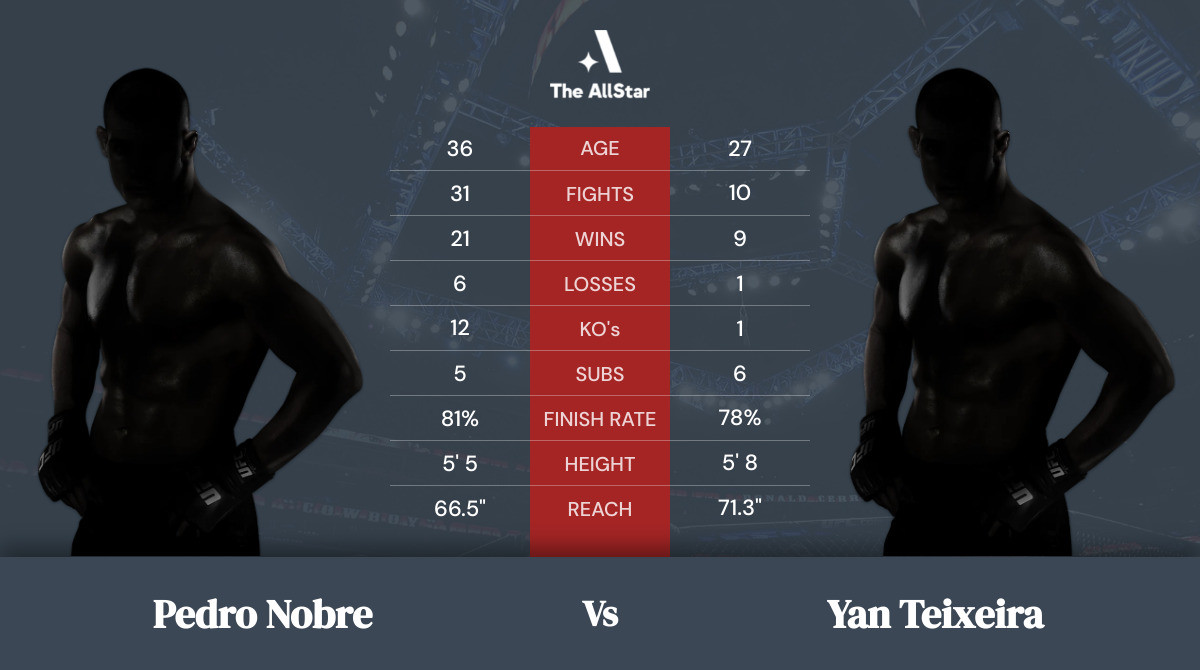 Nobre made his professional debut against Peterson Maffort on March 29, 2009, fighting on the regional circuit.

He made a winning start to his career, defeating Peterson Maffort who carried a 2-2-0 professional MMA record into the fight.

Pedro Nobre beat Peterson Maffort by KO/TKO at of Round 1.

Nobre made his debut in the UFC against Iuri Alcântara on January 19, 2013, fighting on the preliminary card of UFC on FX 7: Belfort vs. Bisping having compiled a 14-1-2 professional MMA record.

Pedro Nobre vs Iuri Alcântara ended in No Contest at 2:11 of Round 1.

After his UFC stint, Nobre took his next fight at WFC on July 7, 2013, fighting against Eduardo Felipe on the main event of Web FC 2.

Pedro Nobre beat Eduardo Felipe by KO/TKO at 3:07 of Round 2.

When was Pedro Nobre's last win?

Who is Pedro Nobre's next opponent?

When was Pedro Nobre's last loss?

How many UFC fights has Pedro Nobre had?

How many pro MMA knockouts does Pedro Nobre have?

Nobre has knocked out 12 opponents.

How many pro MMA submissions does Pedro Nobre have?

How many times has Pedro Nobre been knocked out?

Nobre has been knocked out 3 times.

How many times has Pedro Nobre been submitted?

Nobre has been submitted 1 times.