Sheymon Moraes is a 32 year old Male fighter from Brazil with a 14-6-0 pro MMA record. Moraes is scheduled to fight Marlon Moraes at PFL 10 on Friday November 25, 2022 in a Bantamweight bout.

Sheymon Moraes has 14 wins with a 50% finish rate, including 6 by knockout, 1 by submission, 7 by decision. 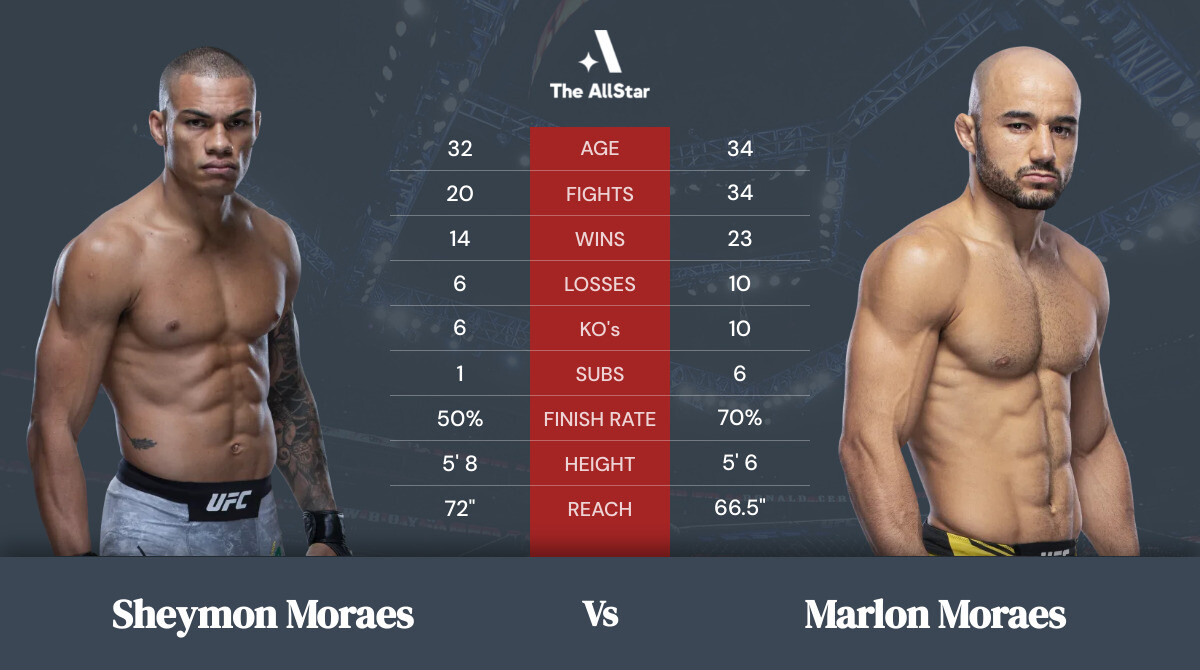 Moraes made his professional debut against Richard Medeiros on March 17, 2012, fighting on the regional circuit.

He made a winning start to his career, defeating Richard Medeiros who carried a 1-1-0 professional MMA record into the fight.

Sheymon Moraes beat Richard Medeiros by Decision at 5:00 of Round 3.

Moraes made his debut in the UFC against Zabit Magomedsharipov on November 25, 2017, fighting on the preliminary card of UFC Fight Night 122: Bisping vs. Gastelum having compiled a 9-1-0 professional MMA record.

Sheymon Moraes lost to Zabit Magomedsharipov by Submission at 4:30 of Round 3.

Since his debut, Moraes has gone on to fight a total of 5 more times in the UFC. His UFC record stands at 2-3-0.

After his UFC stint, Moraes took his next fight at PFL on April 23, 2021, fighting against Brendan Loughnane on the preliminary card of PFL 2021 #1: Regular Season.

Sheymon Moraes lost to Brendan Loughnane by KO/TKO at 2:05 of Round 1.

Moraes is scheduled to fight Marlon Moraes at PFL 10 on Friday November 25, 2022.

Moraes's last loss came against Lance Palmer at PFL 5 on Friday June 24, 2022. Sheymon Moraes lost to Lance Palmer by Decision at 5:00 of Round 3.

How many UFC fights has Sheymon Moraes had?

How many pro MMA knockouts does Sheymon Moraes have?

Moraes has knocked out 6 opponents.

How many pro MMA submissions does Sheymon Moraes have?

How many times has Sheymon Moraes been knocked out?

Moraes has been knocked out 2 times.

How many times has Sheymon Moraes been submitted?

Moraes has been submitted 2 times.