Holly “The Preacher’s Daughter” Holm is a 41 year old Female fighter from United States with a 14-6-0 pro MMA record. Holm is scheduled to fight Yana Kunitskaya at UFC Fight Night on Saturday March 25, 2023 in a Bantamweight bout. 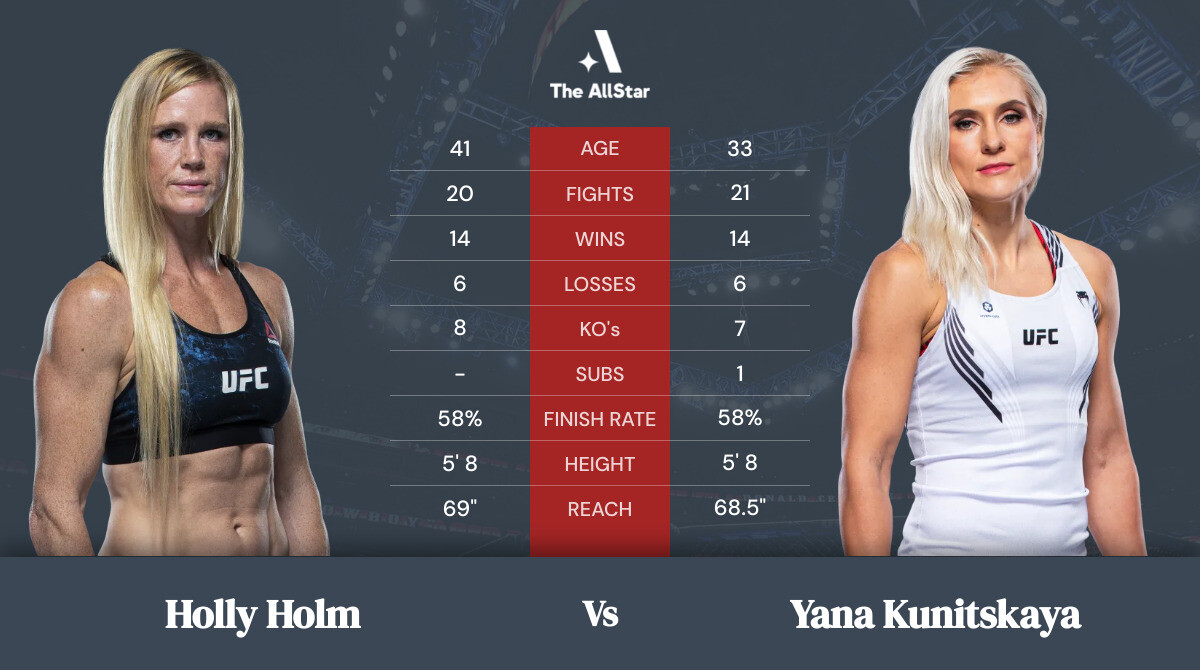 Holm made her professional debut against Christina Domke on March 3, 2011, fighting on the regional circuit.

She made a winning start to her career, defeating Christina Domke who carried a 4-1-0 professional MMA record into the fight.

Holly Holm beat Christina Domke by KO/TKO at 3:58 of Round 2.

Holm made her debut in the UFC against Raquel Pennington on February 28, 2015, fighting on the co-main event of UFC 184: Rousey vs. Zingano having compiled a 7-0-0 professional MMA record.

Holly Holm beat Raquel Pennington by Decision at 5:00 of Round 3.

Since her debut, Holm has gone on to fight a total of 13 more times in the UFC. Her UFC record stands at 7-6-0.

Holly Holm beat Ronda Rousey by KO/TKO at 0:59 of Round 2. Holly Holm took home an extra bonus after being awarded with Performance of the Night as well as Fight of the Night.

The loss meant that Holm had made no successful defences of the UFC bantamweight title.

Holly Holm lost to Miesha Tate by Submission at 3:30 of Round 5.

Holly Holm lost to Germaine de Randamie by Decision at 5:00 of Round 5.

Holly Holm lost to Cris Cyborg by Decision at 5:00 of Round 5. Both fighters earned a post-fight bonus, after the bout was awarded Fight of the Night.

When was Holly Holm's last win?

Who is Holly Holm's next opponent?

When was Holly Holm's last loss?

Holm's last loss came against Ketlen Vieira at UFC Fight Night on Saturday May 21, 2022. Holly Holm lost to Ketlen Vieira by Decision at 5:00 of Round 5.

How many UFC fights has Holly Holm had?

How many pro MMA knockouts does Holly Holm have?

Holm has knocked out 8 opponents.

How many pro MMA submissions does Holly Holm have?

Holm has no submissions on her pro MMA record.

How many times has Holly Holm been knocked out?

Holm has been knocked out 1 times.

How many times has Holly Holm been submitted?

Holm has been submitted 1 times.

Did Holly Holm deserve to win at UFC Vegas 55? An insider’s take