Matt “Steamrolla” Frevola is a 32 year old Male fighter from United States with a 9-3-1 pro MMA record. Frevola is scheduled to fight Ottman Azaitar at UFC 281 on Saturday November 12, 2022 in a Lightweight bout.

Matt Frevola has 9 wins with a 56% finish rate, including 2 by knockout, 3 by submission, 4 by decision. 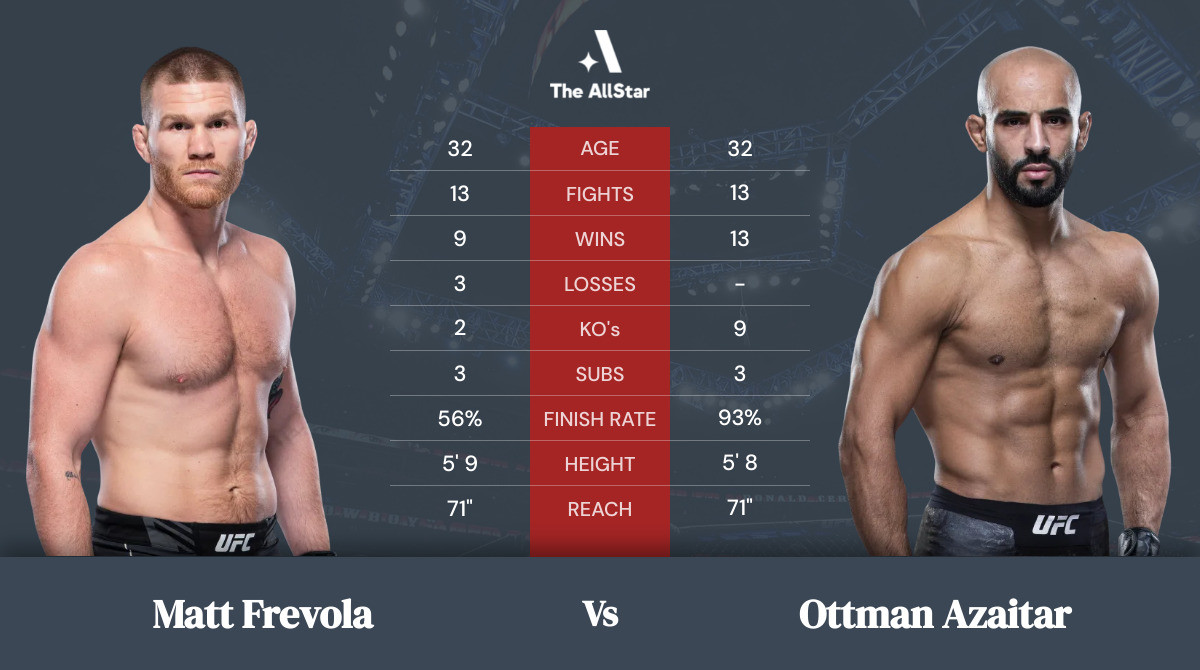 Frevola made his professional debut against Josh Zuckerman on November 15, 2014, fighting on the preliminary card of WSOF 15: Branch vs. Okami.

He made a winning start to his career, defeating Josh Zuckerman who carried a 0-0-0 professional MMA record into the fight.

Matt Frevola beat Josh Zuckerman by Submission at 2:50 of Round 1.

Frevola made his debut in the UFC against Polo Reyes on January 14, 2018, fighting on the preliminary card of UFC Fight Night 124: Stephens vs. Choi having compiled a 6-0-0 professional MMA record.

Since his debut, Frevola has gone on to fight a total of 7 more times in the UFC. His UFC record stands at 3-3-1.

When was Matt Frevola's last win?

Who is Matt Frevola's next opponent?

Frevola is scheduled to fight Ottman Azaitar at UFC 281 on Saturday November 12, 2022.

When was Matt Frevola's last loss?

How many UFC fights has Matt Frevola had?

Frevola has fought 7 times in the UFC. His UFC record stands at 3-3-1.

How many pro MMA knockouts does Matt Frevola have?

Frevola has knocked out 2 opponents.

How many pro MMA submissions does Matt Frevola have?

How many times has Matt Frevola been knocked out?

Frevola has been knocked out 2 times.

How many times has Matt Frevola been submitted?

Frevola has never been submitted.

Islam Makhachev is like Khabib Nurmagomedov but with better striking, says Matt Frevola

Matt Frevola disappointed with new UFC contract, out to prove his worth at UFC 281