“Ruthless” Robbie Lawler is a 40 year old Male fighter from United States with a 29-15-0 pro MMA record. Lawler is scheduled to fight Bryan Barberena at UFC 276 on Saturday July 2, 2022 in a Welterweight bout.

Robbie Lawler has 29 wins with a 76% finish rate, including 21 by knockout, 1 by submission, 7 by decision. 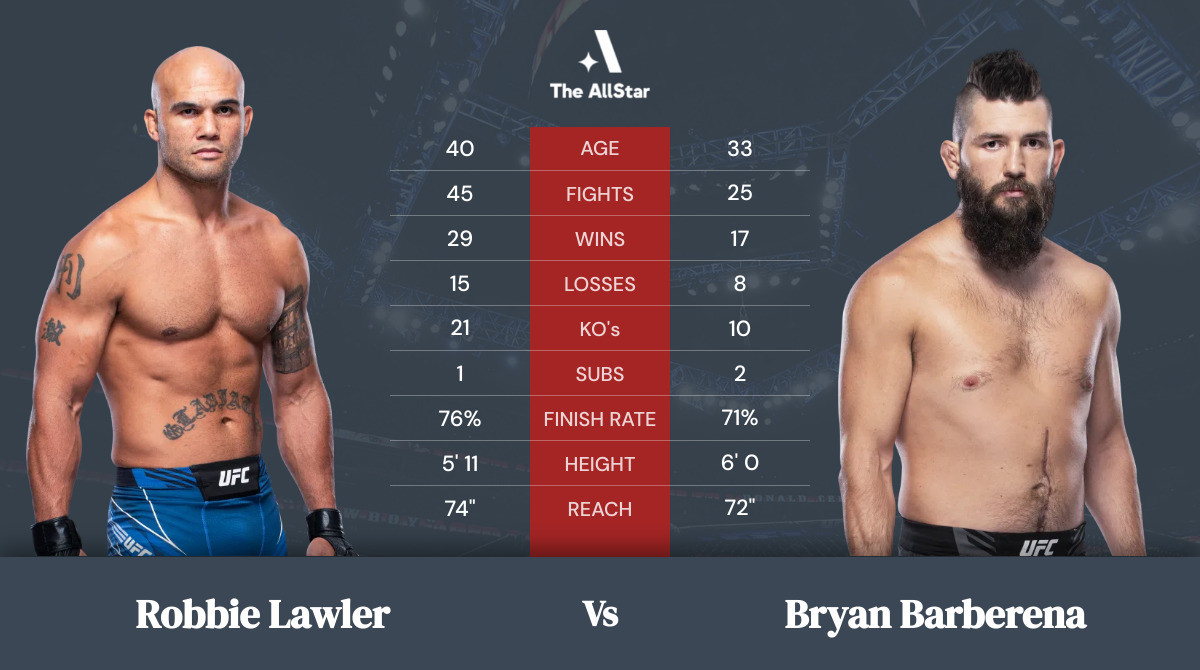 Lawler made his professional debut against John Reed on April 7, 2001, fighting on the main card of Extreme Challenge 39: The New Beginning.

He made a winning start to his career, defeating John Reed who carried a 0-1-0 professional MMA record into the fight.

Lawler made his debut in the UFC against Aaron Riley on May 10, 2002, fighting on the main card of UFC 37: High Impact having compiled a 4-0-0 professional MMA record.

Robbie Lawler beat Aaron Riley by Decision at 5:00 of Round 3.

Since his debut, Lawler has gone on to fight a total of 23 more times in the UFC. His UFC record stands at 14-9-0.

After his UFC stint, Lawler took his next fight at IS on July 23, 2005, fighting against Falaniko Vitale on the main event of Superbrawl 41: Icon.

Robbie Lawler beat Falaniko Vitale by KO/TKO at 4:36 of Round 2.

After 18 fights outside of the promotion, Lawler returned to the UFC on February 23, 2013, fighting against Josh Koscheck on the main card of UFC 157: Rousey vs. Carmouche.

At the time of his UFC return, his professional MMA record stood at 19-9-0

Robbie Lawler beat Josh Koscheck by KO/TKO at 3:57 of Round 1.

Robbie Lawler lost to Johny Hendricks by Decision at 5:00 of Round 5. Both fighters earned a post-fight bonus, after the bout was awarded Fight of the Night.

Robbie Lawler beat Johny Hendricks by Decision at 5:00 of Round 5.

Lawler defended his belt against Rory MacDonald on July 11, 2015 at UFC 189: Mendes vs. McGregor.

Robbie Lawler beat Rory MacDonald by KO/TKO at 1:00 of Round 5. Both fighters earned a post-fight bonus, after the bout was awarded Fight of the Night.

Lawler defended his belt for the 2nd time against Carlos Condit on January 2, 2016 at UFC 195: Lawler vs. Condit.

Robbie Lawler beat Carlos Condit by Decision at 5:00 of Round 5. Both fighters earned a post-fight bonus, after the bout was awarded Fight of the Night.

Lawler lost his UFC Welterweight title to Tyron Woodley on July 30, 2016 at UFC 201: Lawler vs. Woodley having previously made 2 title defences.

Robbie Lawler lost to Tyron Woodley by KO/TKO at 2:12 of Round 1.

When was Robbie Lawler's last win?

Who is Robbie Lawler's next opponent?

Lawler is scheduled to fight Bryan Barberena at UFC 276 on Saturday July 2, 2022.

When was Robbie Lawler's last loss?

Lawler's last loss came against Neil Magny at UFC Fight Night on Saturday August 29, 2020. Robbie Lawler lost to Neil Magny by Decision at 5:00 of Round 3.

How many UFC fights has Robbie Lawler had?

How many pro MMA knockouts does Robbie Lawler have?

Lawler has knocked out 21 opponents.

How many pro MMA submissions does Robbie Lawler have?

How many times has Robbie Lawler been knocked out?

Lawler has been knocked out 2 times.

How many times has Robbie Lawler been submitted?

Lawler has been submitted 6 times.