Damon “The Leech” Jackson is a 34 year old Male fighter from United States with a 22-4-1 pro MMA record. Jackson is scheduled to fight Dan Ige at UFC Fight Night on Saturday January 14, 2023 in a Featherweight bout.

Damon Jackson has 22 wins with a 87% finish rate, including 4 by knockout, 15 by submission, 3 by decision. 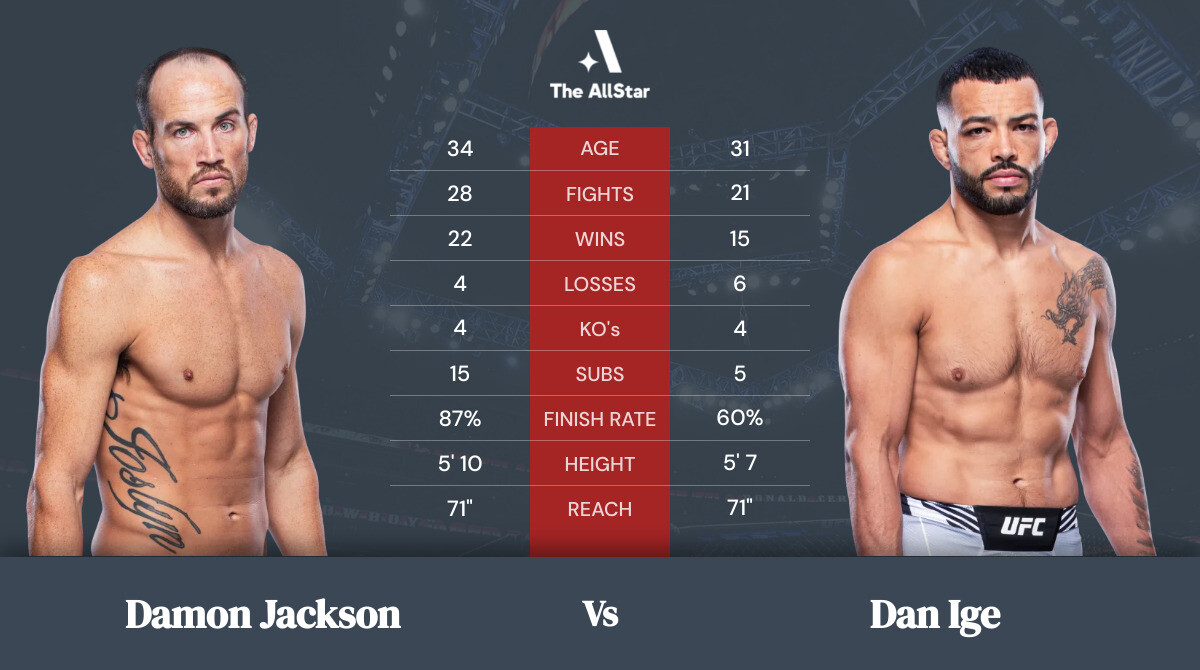 Jackson made his professional debut against Jacob Salyer on September 22, 2012, fighting on the regional circuit.

He made a winning start to his career, defeating Jacob Salyer who carried a 1-0-0 professional MMA record into the fight.

Damon Jackson beat Jacob Salyer by KO/TKO at 2:23 of Round 1.

Jackson made his debut in the UFC against Yancy Medeiros on August 30, 2014, fighting on the main card of UFC 177: Dillashaw vs. Soto having compiled a 9-0-0 professional MMA record.

Damon Jackson lost to Yancy Medeiros by Submission at 1:54 of Round 2.

Since his debut, Jackson has gone on to fight a total of 9 more times in the UFC. His UFC record stands at 5-2-1 with 1 no contest.

After his UFC stint, Jackson took his next fight at LFC on October 14, 2016, fighting against Levi Mowles on the main event of Legacy FC 61: Peterson vs. De La Rosa.

Damon Jackson beat Levi Mowles by Decision at 5:00 of Round 3.

After 10 fights outside of the promotion, Jackson returned to the UFC on September 19, 2020, fighting against Mirsad Bektić on the preliminary card of UFC Fight Night: Covington vs. Woodley.

At the time of his UFC return, his professional MMA record stood at 17-3-1

Damon Jackson beat Mirsad Bektić by Submission at 1:21 of Round 3. Damon Jackson took home an extra bonus after being awarded with Performance of the Night.

When was Damon Jackson's last win?

Who is Damon Jackson's next opponent?

When was Damon Jackson's last loss?

Jackson's last loss came against Ilia Topuria at UFC Fight Night on Saturday December 5, 2020. Damon Jackson lost to Ilia Topuria by KO/TKO at 2:38 of Round 1.

How many UFC fights has Damon Jackson had?

Jackson has fought 9 times in the UFC. His UFC record stands at 5-2-1 with 1 no contest.

How many pro MMA knockouts does Damon Jackson have?

Jackson has knocked out 4 opponents.

How many pro MMA submissions does Damon Jackson have?

How many times has Damon Jackson been knocked out?

Jackson has been knocked out 3 times.

How many times has Damon Jackson been submitted?

Jackson has been submitted 1 times.

Will UFC Vegas 60 give us the next featherweight contender? Damon Jackson thinks so

Charles Rosa Looking to Knock Damon Jackson Out This Saturday