“Sugar” Sean O’Malley is a 27 year old Male fighter from United States with a 15-1-0 pro MMA record. O'Malley is scheduled to fight Petr Yan at UFC 280 on Saturday October 22, 2022 in a Bantamweight bout. 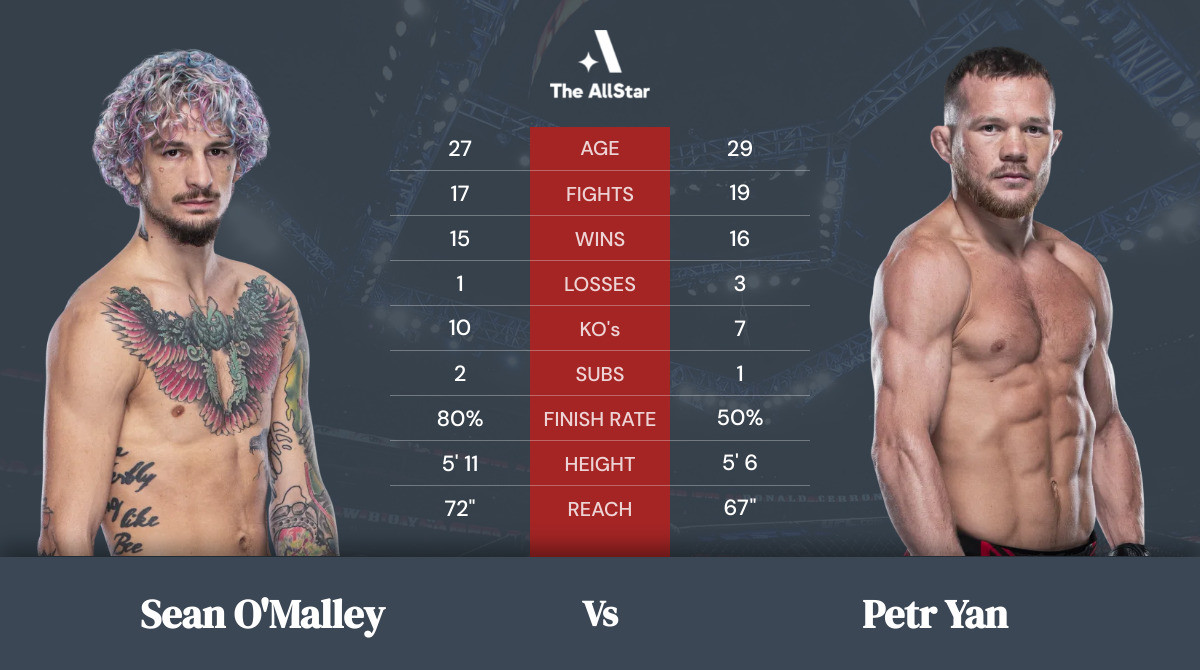 O'Malley made his professional debut against Josh Reyes on March 6, 2015, fighting on the main event of Intense Championship Fighting 17.

He made a winning start to his career, defeating Josh Reyes who carried a 0-0-0 professional MMA record into the fight.

Sean O'Malley beat Josh Reyes by Submission at 1:33 of Round 1.

O'Malley made his debut in the UFC against Terrion Ware on December 1, 2017, fighting on the co-main event of The Ultimate Fighter 26 Finale having compiled a 8-0-0 professional MMA record.

Sean O'Malley beat Terrion Ware by Decision at 5:00 of Round 3.

Since his debut, O'Malley has gone on to fight a total of 9 more times in the UFC. His UFC record stands at 7-1-0 with 1 no contest.

When was Sean O'Malley's last win?

Who is Sean O'Malley's next opponent?

When was Sean O'Malley's last loss?

How many UFC fights has Sean O'Malley had?

How many pro MMA knockouts does Sean O'Malley have?

O'Malley has knocked out 10 opponents.

How many pro MMA submissions does Sean O'Malley have?

How many times has Sean O'Malley been knocked out?

O'Malley has been knocked out 1 times.

How many times has Sean O'Malley been submitted?

O'Malley has never been submitted.

The MMA Daily: Sean O’Malley claims he `could submit Khabib’ and people would still doubt him

Adrian Yanez on potential Sean O’Malley clash: “I stop him, I love this fight for myself”

UFC: After rough debut loss to Sean O’Malley, Kris Moutinho is back to put on a show