Donald “Cowboy” Cerrone is a 39 year old Male fighter from United States with a 36-16-0 pro MMA record. Cerrone is scheduled to fight Jim Miller at UFC 276 on Saturday July 2, 2022 in a Welterweight bout. 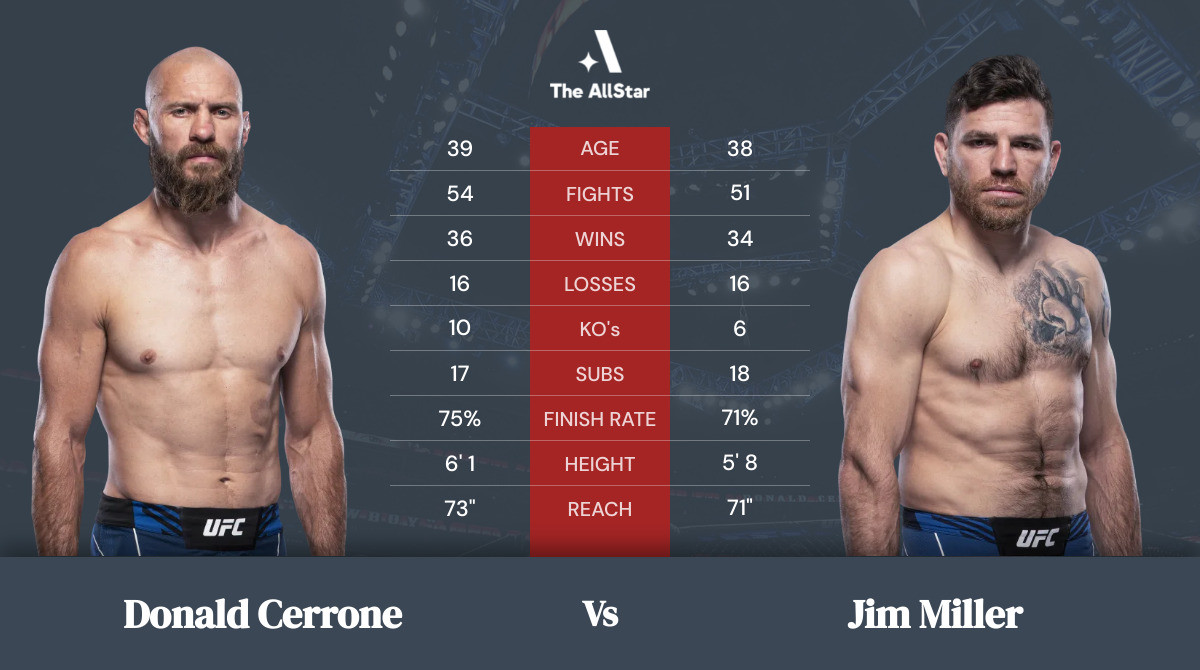 Cerrone made his professional debut against Nate Mohr on February 11, 2006, fighting on the regional circuit.

He made a winning start to his career, defeating Nate Mohr who carried a 3-2-0 professional MMA record into the fight.

Donald Cerrone beat Nate Mohr by Submission at 1:42 of Round 1.

Cerrone made his debut in the UFC against Paul Kelly on February 5, 2011, fighting on the preliminary card of UFC 126: Silva vs. Belfort having compiled a 13-3-0 professional MMA record.

Donald Cerrone beat Paul Kelly by Submission at 3:48 of Round 2. Both fighters earned a post-fight bonus, after the bout was awarded Fight of the Night.

Since his debut, Cerrone has gone on to fight a total of 37 more times in the UFC. His UFC record stands at 23-13-0 with 1 no contest.

Cerrone defeated the previously unbeaten Myles Jury on January 3, 2015, at UFC 182: Jones vs. Cormier. Myles Jury came into the fight with a 15-0-0 record. Cerrone was a -130 betting favorite going into the fight. Donald Cerrone beat Myles Jury by Decision at 5:00 of Round 3.

Donald Cerrone lost to Rafael dos Anjos by KO/TKO at 1:06 of Round 1.

When was Donald Cerrone's last win?

Cerrone's last win came against Al Iaquinta at UFC on ESPN+ 9 on Saturday May 4, 2019. Donald Cerrone beat Al Iaquinta by Decision at 5:00 of Round 5. Both fighters earned a post-fight bonus, after the bout was awarded Fight of the Night.

Who is Donald Cerrone's next opponent?

When was Donald Cerrone's last loss?

Cerrone's last loss came against Alex Morono at UFC Fight Night on Saturday May 8, 2021. Donald Cerrone lost to Alex Morono by KO/TKO at 4:40 of Round 1.

How many UFC fights has Donald Cerrone had?

How many pro MMA knockouts does Donald Cerrone have?

Cerrone has knocked out 10 opponents.

How many pro MMA submissions does Donald Cerrone have?

How many times has Donald Cerrone been knocked out?

Cerrone has been knocked out 8 times.

How many times has Donald Cerrone been submitted?

Cerrone has been submitted 1 times.