Petr “No Mercy” Yan is a 29 year old Male fighter from Russia with a 16-4-0 pro MMA record. Yan is scheduled to fight Merab Dvalishvili at UFC Fight Night on Saturday March 11, 2023 in a Bantamweight bout.

Petr Yan is currently on a 2 fight losing skid. 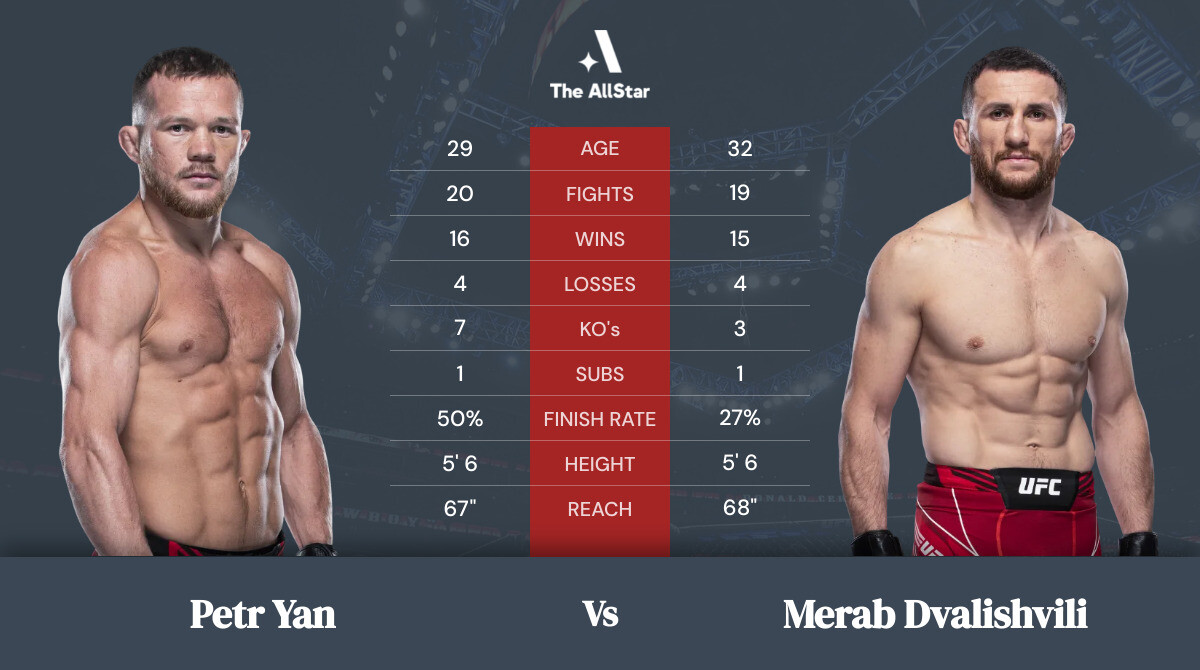 Yan made his professional debut against Murad Bakiev on December 20, 2014, fighting on the main card of Baikal Storm: Irkutsk vs. Omsk.

He made a winning start to his career, defeating Murad Bakiev who carried a 0-0-0 professional MMA record into the fight.

Yan made his debut in the UFC against Teruto Ishihara on June 23, 2018, fighting on the preliminary card of UFC Fight Night 132: Cowboy vs. Edwards having compiled a 8-1-0 professional MMA record.

Since his debut, Yan has gone on to fight a total of 11 more times in the UFC. His UFC record stands at 8-3-0.

Yan lost his UFC Bantamweight title to Aljamain Sterling on March 6, 2021 at UFC 259: Błachowicz vs. Adesanya.

The loss meant that Yan had made no successful defences of the UFC bantamweight title.

Petr Yan lost to Aljamain Sterling by Disqualificaton at 4:29 of Round 4.

Petr Yan beat Cory Sandhagen by Decision at 5:00 of Round 5. Both fighters earned a post-fight bonus, after the bout was awarded Fight of the Night.

Petr Yan lost to Aljamain Sterling by Decision at 5:00 of Round 5.

When was Petr Yan's last win?

Yan's last win came against Cory Sandhagen at UFC 267 on Saturday October 30, 2021. Petr Yan beat Cory Sandhagen by Decision at 5:00 of Round 5. Both fighters earned a post-fight bonus, after the bout was awarded Fight of the Night.

Who is Petr Yan's next opponent?

When was Petr Yan's last loss?

Yan's last loss came against Sean O'Malley at UFC 280 on Saturday October 22, 2022. Petr Yan lost to Sean O'Malley by Decision at 5:00 of Round 3. Both fighters earned a post-fight bonus, after the bout was awarded Fight of the Night.

How many UFC fights has Petr Yan had?

How many pro MMA knockouts does Petr Yan have?

Yan has knocked out 7 opponents.

How many pro MMA submissions does Petr Yan have?

How many times has Petr Yan been knocked out?

Yan has never been knocked out.

How many times has Petr Yan been submitted?

Yan has never been submitted.

The MMA Daily: Sean O’Malley is the underdog versus Petr Yan

What is the secret to Aljamain Sterling defeating Petr Yan at UFC 273?

Will Aljamain Sterling’s neck issues hamper him in the rematch against Petr Yan?

What makes Petr Yan so great?