Randy “Rudeboy” Brown is a 32 year old Male fighter from Jamaica with a 16-4-0 pro MMA record. Brown is scheduled to fight Jack Della Maddalena at UFC 284 on Saturday February 11, 2023 in a Welterweight bout.

Randy Brown has 16 wins with a 69% finish rate, including 6 by knockout, 5 by submission, 5 by decision. 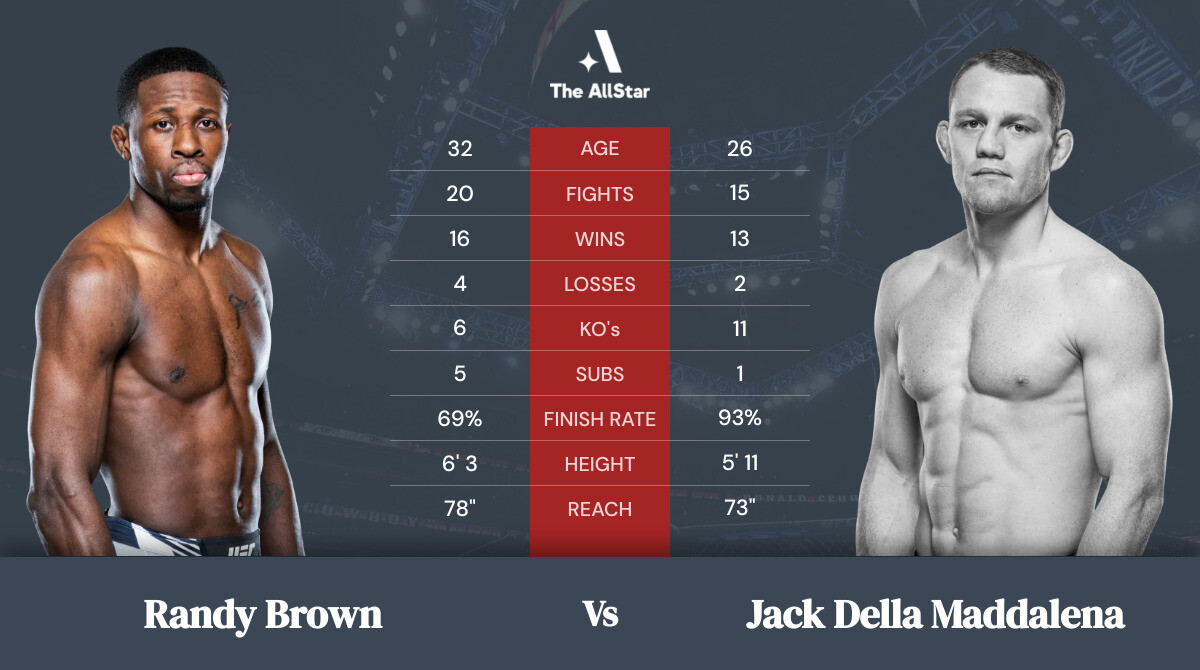 Brown made his professional debut against Steve Tyrrell on May 16, 2014, fighting on the main card of Ring of Combat 48.

He made a winning start to his career, defeating Steve Tyrrell who carried a 0-0-0 professional MMA record into the fight.

Randy Brown beat Steve Tyrrell by Submission at 1:53 of Round 1.

Brown made his debut in the UFC against Matt Dwyer on January 30, 2016, fighting on the preliminary card of UFC on FOX 18: Johnson vs. Bader having compiled a 6-0-0 professional MMA record.

Randy Brown beat Matt Dwyer by Decision at 5:00 of Round 3.

When was Randy Brown's last win?

Who is Randy Brown's next opponent?

Brown is scheduled to fight Jack Della Maddalena at UFC 284 on Saturday February 11, 2023.

When was Randy Brown's last loss?

Brown's last loss came against Vicente Luque at UFC Fight Night on Saturday August 1, 2020. Randy Brown lost to Vicente Luque by KO/TKO at 4:56 of Round 2.

How many UFC fights has Randy Brown had?

How many pro MMA knockouts does Randy Brown have?

Brown has knocked out 6 opponents.

How many pro MMA submissions does Randy Brown have?

How many times has Randy Brown been knocked out?

Brown has been knocked out 2 times.

How many times has Randy Brown been submitted?

Brown has been submitted 1 times.

Learning on the job: Randy Brown’s journey from Lookin’ For A Fight to welterweight top gun

Randy Brown On Jared Gooden Fight: “I Know I Get This Done Wherever and However I Want”